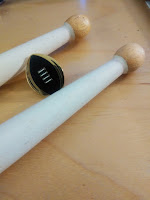 College marching bands have been sidelined - literally and figuratively - all season long. As the College Football Playoff championship game looms, we will miss out on a dual Sudler matchup between Alabama's Million Dollar Band and Ohio State's TBDBITL, but there's a halftime to be had that's much farther reaching.
The College Band Directors National Association, in conjunction with partners including CollegeMarching.com,  StylePLUS, Halftime Magazine, Guard Closet, and FansRaise, have put together the Intercollegiate Marching Band, presented by GPGMusic and OurVirtualEnsemble.com. The IMB will feature over 1500 students from nearly 200 college bands to perform a virtual halftime show to debut on YouTube as college football crowns its College Football Playoff champion. The ensemble will perform Beyonce's End of Time in a two minute performance set to drop at halftime. And while performing at the championship game has been traditionally reserved for a precious few bands whose football teams reach the pinnacle of the sport, the Intercollegiate Marching Band will feature performers from across all NCAA divisions, the NJCAA, and the NAIA.
While the Rose Bowl contractually obligates ESPN/ABC to show a portion of each band's halftime performance, the Worldwide Leader has followed suit for each of the major bowl games from what was then the BCS since they got broadcast rights back from Fox in the 2010 football season. Still, the two minutes they show have often been clumsy: Despite bands typically performing repeat shows that could be scouted and well produced for the television broadcast, they have instead opted for a midshow chunk with seemingly little more rhyme or reason than checking a box.
In contrast, the IMB will have a performance painstakingly put together by OurVirtualEnsemble.com. Virtual performances have been a necessary mainstay of pandemic life. Virtual Arts sprung up in the wake of the cancelled DCI season to put together a virtual drum corps performance, and continued in to the typical high school/college marching and indoor seasons. And while ensembles would much rather be together, these ensembles both bridge the gap until students are with their respective programs again, and present opportunities never before seen until necessity created it.
I don't know if ESPN has yet announce what they will do for halftime, if they do anything at all other than a studio show. In the past, they have flirted with replacing or counter-programming marching bands at halftime with a Super Bowl style recording artist, and admittedly, with no bands in the building this would be the year to do it. But if they were to pick up the IMB performance, they would solidify a fact that marching bands are an inextricable part of college football, in a year where they've gone sorely missed.
I know what I'll be watching at halftime.
at 5:36 PM No comments:

It's no secret I've been less than excited for this college football season. Eventually, all ten conferences at the FBS level began play, and amid positive tests, game cancellations, and general making it up as they go along, we'd made it to the college football playoff. The selection committee has placed its four teams: Alabama, who went undefeated against a ten game SEC schedule; Notre Dame and Clemson, who split a regular season matchup and the ACC championship game with one another; and Ohio State, who played only five regular season games and a Big Ten championship game after the conference's schedule commenced in late October. Absent from the field, as always, is any Group of Five representation; this year's most deserving candidate was Cincinnati, who went undefeated in the American Athletic Conference, but never once threatened for inclusion in the eyes of the committee.

If I may use one of the pandemic's catch phrases, this year's playoff looks a little different than years prior. No bands will be present, and crowds will be sparse. Amid California's restrictions on crowds, the Rose Bowl, which hosts a semifinal this year, will take place in AT&T Stadium in Arlington. But the games will play on, with the semifinals kicking off this afternoon and evening.

The Rose Bowl will feature Alabama and Notre Dame in a game that sounds as historic as the sport itself. Surprisingly, the two teams have only met seven times in college football's history, with the last matchup being a decisive Bama victory in the penultimate BCS Championship. While the coaches remain the same, both teams have evolved since that meeting eight years ago.

A game against one another is fresh in the muscle memory of both Clemson and Ohio State, who played to a hard fought Clemson victory in last year's semifinal. Clemson's sole loss this year came against Notre Dame, with QB Trevor Lawrence out with a positive COVID test. The two have traded barbs over their respective paths to the playoff: Clemson coach Dabo Swinney voted Ohio State #11 on his coaches poll ballot, citing their lack of games, while Ohio State offensive coordinator got in a dig at Clemson for their early season matchup against FCS in-state opponent Citadel.

Both games will feature a north vs. south dynamic that has been part of the sport since its founding in the echo of the Civil War, though neither will play out between rival conferences the Big Ten and SEC. Should Alabama and Ohio State win their matchups today, we'll see that play out in South Florida in ten days.