Is This Real Life? Part 3 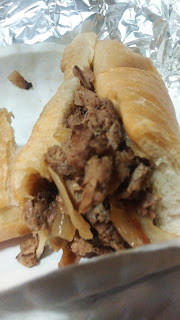 Hold up wait a minute... y'all thought I was finished? -Meek Mill, Dreams and Nightmares

As I prepared myself for the Eagles to compete in and ultimately win the Super Bowl I knew I needed to send all of the appropriate vibes to Minneapolis for the team. What did that mean? Curating a Philly experience for myself here in North Carolina.

First, what I did not do, though I considered it for longer than was logical: Before there was a Rita's Water Ice here in Greensboro (it since has left), my wife and I used to plan our trips to Charlotte or the Triangle such that a trip to Rita's was involved. I remembered that during one such trip, we passed what seemed to be an exclave of Philly in Mooresville: a Rita's right next to a pretzel jawn (which I now know to be Philly Pretzel Company). It's about an hour and 20 minutes from home, but I thought about making the trip. In another direction, I had heard the team on 919 Beer speak of Patrick Jane's in Cary, which "imports" Amoroso rolls for its cheesesteaks.

Still, I stayed local. After crowdsourcing recommendations for cheesesteaks, I landed on an option right around the corner from which I had often ordered pizza, and Burke Street Pizza (pictured) is legit. I grabbed some Tastykake products (and introduced my kids to Butterscotch Krimpets) locally as well.

Then there was the beer selection. In a normal year, I'd typically do a make-your-own-six pack with representation from the cities/regions of both teams, or perhaps the host city, but for obvious reasons I was going all Delaware Valley. I knew my first call was going to be Victory - from Downingtown, and appropriately named. I got a six of Home Grown lager. Turns out my choose your own ended up all Victory as well - Festbier, Mighty Things, Dirtwolf, 4 Front, Golden Monkey, and HopDevil.

What I left out? Dogfish Head. I came to be an Eagles fan through Delaware, but Dogfish Head is downstate. I can't promise the folks in Slower Lower are thorough - too many Skins fans down there. Plus, Sam named Dogfish Head after a place in Maine. No New England here.

The Philly love continued into the broadcast: God Bless America by Leslie Odom, Jr. The National Anthem by Pink. And of course the team taking the field to Meek Mill. And after the victory, Philly's own Kevin Hart getting bounced from the dais. Back in Philly, the parade feature Jason Kelce dressed as Mummer and reprising a Philadelphia Union chant, and Chris Long in an Iverson jersey. The city and environs responded in kind, turning out in an estimated 700,000 for the victory parade.

Postscript: I offer no apologies and seek no absolution for backsliding and watching the Super Bowl. Still, if there were any team I was proud to root for in the midst of Kaepernick remaining unemployed, the Eagles were the best choice available. I don't yet know what the future holds for me and the League, but now and always, Fly Eagles Fly.
at 11:48 PM No comments:

Is This Real Life? Part 2 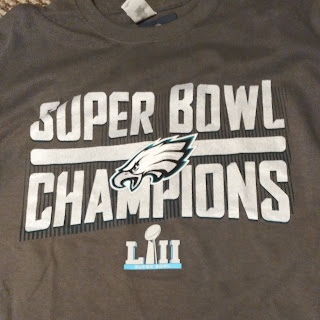 Sunday, February 4, 2018 was an emotional day, and I found myself teary-eyed quite a bit. I have no intention of presenting myself like Stoick the Vast or Billy Bad-Ass, but I don't find myself moved to tears quite as often as Jimmy V recommends, even after fatherhood. That day, however, an incomplete list, from the normally insignificant to the sublime, of things that brought tears:

-The climax of "Going the Distance" from the Rocky soundtrack
-SNL's Super Bowl sketch
-Posting about my Eagles flag on Instagram
-When fans of other teams reached out to tell me they were rooting for the Eagles
-When the Eagles took the field to Meek Mill's Dreams and Nightmares
-Pretty much the entire 4th quarter through the failed Hail Mary, confirming in disbelief that the clock had hit 0.0, and the Eagles were World Champions
-Getting texts from people I hadn't spoken to in a while because I am "their" Eagles fan
-The trophy ceremony

Is This Real Life? Part 1 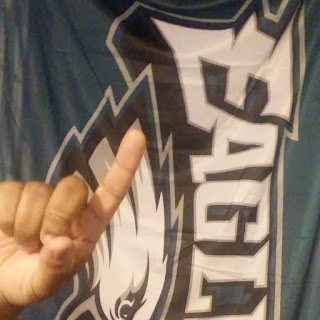 I used to pray for times like this... -Meek Mill, Dreams and Nightmares

Nope, it doesn't get old.

If you follow on any social media - and if you do, I appreciate it - you may have been surprised that while I talked some noise prior to the game, i was relatively quiet during it. I've mentioned in the past that the lines are blurred between 80 Minutes of Regulation and friendly, mild-mannered Curtis, and frankly, Curtis was far to engrossed in this game to give "content". Simply put, this was the game - and subsequently the outcome - that has meant the most of me in all of sport.

There have been scant few times when I've gotten to see "my" team win a championship. There have been some misses - Super Bowl XXXIX and the 2001 NBA Finals come to mind - but rarely have I seen a team I claim hoist the ultimate prize, and never has it been a team I care about as much as the Eagles. To name a few, in no particular order:

-2004 Boston Red Sox. To the degree that I care about baseball - not much - I'm a Red Sox fan. 2004 was about a point in time in history and the shattering of an 86 year curse that it made me feel in a way that I can't claim with the 2007 or 2013 titles. Still, baseball's not my thing, so happy as I was, I deflected the joy to my Boston area friends who were living this in a way I could not yet fathom.

-2008 Philadelphia Phillies. As noted above, I'm not a Phillies fan, but this one wasn't for the team, it was for the city, finally tunneling out of a 25 year, 100 season drought in the four major sports.

-2013 Carolina Crown. Crown finally made it to the mountaintop after some near misses in the previous seasons. I actually experienced the 2013 awards ceremony from a hotel in Virginia while traveling.

-2002 Maryland Terrapins men's basketball. Though admittedly, the Final Four loss the year prior, which I experienced from College Park, probably had more of an impact on me.

-1999/2011 Baltimore Ravens. I experienced the 2000 Super Bowl from the game room at UMBC. The Ravens weren't my team, I was only a semester into my Baltimore identity formation, and I wasn't nearly the sports fan then that I am now, but there was something about that city literally and figuratively lighting up purple. By the 2012 Super Bowl, I was all in, having done an entire undergraduate career and marrying into a Ravens family by that point.

While I had some ownership of each of those, Sunday night was truly mine. 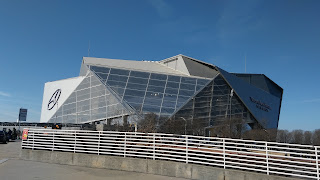 This past Saturday, the Honda Battle of the Bands, which had called Atlanta's Georgia Dome home since its inception in 2003, took place for the first time in Mercedes Benz Stadium, the new home of the Atlanta Falcons and most events that previously called the Georgia Dome home.

It won't return next year.

Band Room Nation broke the news just minutes before Honda stepped off: Because Atlanta will host the Super Bowl in 2019, they will not host the Honda because of the "scheduling conflict":

To be clear, there is no "scheduling conflict," at least not with the Super Bowl itself. Honda has always taken place during the weekend between conference championships and the Super Bowl, a weekend that has also been occupied by the Pro Bowl since 2010. Frankly, the NFL would do well to incorporate the Honda the "championship halftime" and to kick off Super Bowl week. But if The Shield, the city of Atlanta, or whoever else has determined it's a conflict, I suppose there's nothing to debate there. So where to next?

There are two logical choices, and I'll snowball a third longshot. Honda's late January timing makes an indoor stadium the ideal choice in pretty much the entire continental US except for Florida. Both the Mercedes Benz Superdome in New Orleans and NRG Stadium in Houston fit that bill, are used to hosting HBCU events, and fall within the HBCU footprint. That footprint distinction is an interesting one: Should it land in either of those spots, it would make the move from MEAC (and SIAC) country onto the SWAC's turf. Certainly the SWAC bands that always have to take the hike would be pleased. Could a successful Honda in New Orleans or Houston - and with relatively little effort, a sellout is likely - have Honda questioning its allegiance to ATL, and lead to a rotation of HBCU marching's largest stage?

The third option - and full disclosure, I live in North Carolina - would be Charlotte. Bank of America Stadium is open air and farther north than Atlanta, making it a bit of a tougher sell. But the Queen City seems positioned as the next city up on the south Atlantic coast, and takes many of its cues from Atlanta: Hosting QC Battle of the Bands to Atlanta's Honda; the Belk Kickoff to Atlanta's Chick-Fil-A Kickoff. Both host college football conference championships. This past summer, when DCI's Southeastern Classic was moved and downsized in the Atlanta stadium interregnum, it was North Carolina (Winston-Salem, granted) who saw the biggest boon in the supersized NightBEAT show. Charlotte is just about as accessible by air and road as Atlanta. So while an outdoor venue is unlikely to be considered, Charlotte would be a strong choice.
at 4:18 PM No comments: