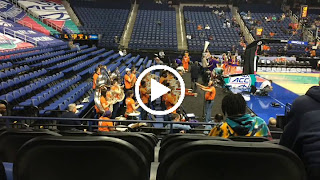 It never came to pass, but for one shining moment, we knew that pep bands were essential personnel.

News of the college hoops world's reaction to the Coronavirus pandemic changed very quickly. Mid day this past Wednesday, I expected to spend Thursday night in the Greensboro Coliseum for the ACC Tournament quarterfinals. By that evening we would learn that no fans would be in attendance, before the tournament was cancelled completely about a half hour before the tip of the first quarterfinal game.

But an awesome thing happened: As those who were allowed to attend filed into the Coliseum for the first quarterfinal matchup, among them were FSU and Clemson's pep bands. It's what I believe should have happened - social distancing is important, of course, but the pep bands occupy a part of the arena distinct from those occupied by the team or the media who we knew would be present. Keeping the pep bands allows for a modicum of normalcy in absurd times, ensuring that both teams have some of their most fervent supporters and their soundtrack, present. It would seem that the Atlantic Coast Conference agreed, as both bands were to be among those in attendance before the tournament was abruptly curtailed. While the game was never played, it's great that if it had been, the bands would have been on hand.