Moderate Use of Caps

I'm not going to front like I'm a Washington Capitals fan, but they're close enough to my circles that I'm keeping a bit of an eye on their Stanley Cup run. Devoid a team of their own, my Baltimore folks tend to root for the Caps (to the annoyance of others who don't mess with DC like that). I'm also two generations deep in DC-ness, and tend to swing pan-mid-Atlantic, so despite it probably being ill advised as a Philly sports fan rooting elsewhere in the Metro division, I'm pulling for the Caps. There are a few more reasons to side with the team from the District:

-My overwhelming East Coast bias
-My soft spot for long suffering cities/franchises
-The other team's called the Golden Knights. As a USF alumnus, I simply cannot root for a team with that moniker.
-A successful Stanley Cup campaign would mean that Vegas won a championship in their very first season of competition. Call me a hater, but I've suffered far too many seasons to go for that.

While I'm not #ALLCAPS like some of my friends are, I'm in for a Moderate Use of Caps.
at 5:35 PM No comments:

To provide too much information as a matter of context: Two days ago, I went to the doctor to ensure there's no need for an expansion draft in this household. The common stereotype/reality is that men schedule vasectomies for the start of March Madness - if you're going to be confined to the couch for a couple of days, there are far worse times than one where you can watch college hoops around the clock. I'm learning first hand that Memorial Day weekend is a strong choice as well.

As a lacrosse fan, Memorial Day weekend immediately registers as championship weekend for me; I caught both semifinals yesterday and will watch Yale and Duke compete for the championship tomorrow. We're also at a time of year where three of the four major sports are in session, including a Game 7s in the NBA tonight and tomorrow, and the start of the Stanley Cup Finals. And today features three major auto races - Monaco Grand Prix, Indianapolis 500, and the Coca Cola 600. All in all, it's not a bad time to be sidelined.
at 3:12 PM No comments:

Eye Off The Ball 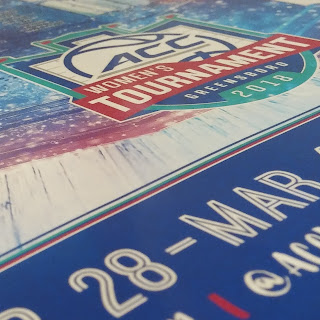 Sometimes, greatness can be right before you, and you don't even know it.

For many years, I've attended the ACC Women's Basketball Tournament here in Greensboro. While I get the opportunity to enjoy some of the best basketball in the country, I'll acknowledge that my attendance is, at its root, a band trip. I watch the games, certainly, but may sometimes miss some of the individual stars.

This year I got to see eventual tournament runner up (and eventual national champion) Notre Dame in the quarterfinals. While I made plenty of note of their pep band, I failed to take note of Arike Ogunbowale. She didn't have a particularly standout game - 27 minutes and 16 points in an 83-47 drubbing of UVA - but she would become a household name weeks later as the fired off buzzer beaters to take Notre Dame both to and through the national championship game.
at 11:41 PM No comments: