Joe Cahn, self-proclaimed Commissioner of Tailgating, has been known to say the best tailgate is the one you're at. It is in that spirit that I resume the Band on the Road Game of the Week. This weekend, I'm headed to Charlotte as Tennessee takes on West Virginia in the Belk College Kickoff. Schedule won't allow me to catch the game, but I expect I'll get a good deal of the cadence of gameday from the lot and pre-events, not the least of which is SEC Gameday on the SEC Network. I'm sure there will be spirited debates on musket toting, mountain worship, moonshining, and circle drills.

What's more: As the Pride of West Virginia makes their way south, they're making a pit stop to perform a high school football halftime at Mount Tabor High School in nearby Winston-Salem, so I'm headed over to catch them under the Friday Night Lights as well.

Finally, since I didn't herald it except for updating the link from the main site, Band on the Road 2018 is up! As always, editing is not only allowed, but encouraged. If there are trips you know are taking place, let us all know!
at 12:15 AM No comments: 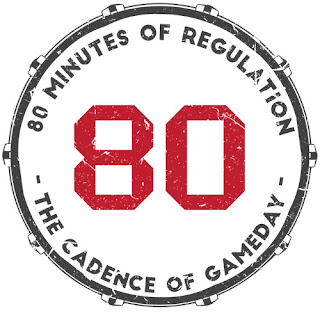 I can't remember exactly when the name came to be. It was probably at some point when I decided my sports blog and band blog would become one that the concept was born. In lieu of any actual design skills, the logo - a digital display reading 80:00 - was born, and has endured, with only minor modifications, for over ten years.

A good deal more recently, I decided I wanted something done by someone who knows what they're doing. The fact of the matter is, 80 Minutes of Regulation is here to stay, and I'm not against spending a few bucks on something professionally done. Fiverr seller techstrocity was the talent that brought a vague concept to life in a way I couldn't have imagined - a bass drum head with jersey numbers is about as on-brand as it gets. Here's to entering the site's second decade in style.
at 10:17 PM No comments: