The last year has been rebrand season at each of the universities I'm associated with. Both alma maters and my employer went through some sort of brand update, to either the athletic logo, institutional logo, or both, to varying success.

First my graduate alma mater, USF. I've already given both its original ill conception and its eventual coup de grace considerable time here, so no need to rehash that. 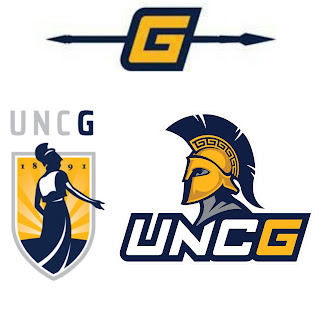 UNCG has new looks with both the institutional logo and the athletic/spirit logo. Full disclosure: I like the change quite a bit, and if I didn't, I'd probably keep my mouth shut - can't bite the hand that feeds me.

The institutional look has been termed a "brand refresh," and still features the tried and true Minerva shield. The colors have updated - slight changes to the shades of blue and gold used, and gray added - and the text emphasized the G, as it does in the athletic logo.

The athletic logo's new look Spartan is a fierce upgrade from an already strong look with the now retired rising shield. My favorite of the secondary marks is the G Spear. While it's not a standalone logo, it again emphasizes the primary logo with a spear that is unmistakably Spartan - the classical accuracy to include the sauroter on the back end of the spear is much appreciated attention to detail.

And then there's alma mater #1. They're not changing the athletic logo - that took place nearly a decade ago.  It's the institutional logo that got an update, and I love it. I was clued in to the coming change back in September, when I got to participate in a survey that presented two options. Of these, my preferred option incorporated the Calvert (black and gold) portion of the flag, rotated 90 degrees (which left me vexillologically vexed, as that's now how it would present on a properly hung flag) on an escutcheon like the one seen here. The end result was far better than I could have expected.

The UMBC wordmark has been a mainstay for decades; it's the shield that's being added. Having used only the Calvert portion as in the survey, they would have been at once right and wrong. On the one hand, our colors are black and gold, so it makes sense. That peeloff has been used plenty, including the Retriever Nation and Lot 17 (soccer supporters club) logos. I fly a Calvert flag at my tailgates these days. It's the primary element in the Baltimore flag, which is where things get interesting - UMBC's not located in Baltimore. In using both the Calvert and Crossland colors, they asserted our importance to the state, and reinforce at least the "M" for those who may not immediately recognize the acronym, even after March 16, 2018. It's even blazonable: An escutcheon, fimbriated cendrée and sable, the arms of Calvert and Crossland dimidiated. UMBC's got a great new look.
at 2:05 AM