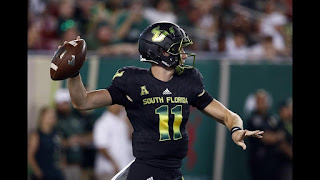 Back when USF unveiled their new Adidas uniforms this summer, there was one look that caught my eye. A look so wrong, yet so right. The Bulls wore it in game for the first time this past weekend at Homecoming.

Most of my uniform nerd sensibilities should lead me to hate this combo. It's black for black's sake. It contains shades of our colors that aren't actually ours. Some would be inclined to call it gawdy, and frankly they wouldn't be wrong.

Yet somehow, I love it.

It's flashy, and uses its bright colors in a way that look downright sharp. It was probably designed to go over well with "the kids," and while I'm decidedly not them, it's got me hooked. So while I prefer seeing us in the proper green an gold most of the time, this one can stay.

Apparently, it's rebrand season. My employer, UNC Greensboro, just underwent a rebrand - excuse me, "brand refresh" of both the athletic and institutional logos prior to the start of this school year. UMBC sent out a survey to alumni and stakeholders back in late August asking us to weigh in on a few options for an update to the institutional logo. And just recently, USF released - and quickly began pushing something fierce - a new institutional logo. It has been pretty unilaterally rejected by those of us with ties to the university - myself included.

Upon seeing just the logo,  a few things struck me. First, as many have noted, it immediately evokes the Merrill Lynch logo. I've been inclined to point out Johnson C. Smith as well. The bull used departs from our history as Brahmans (though admittedly, that ship sailed long ago). And while I just praised the mismatch for an alternate uniform above, it strays from our school colors, opting instead for green and "USF Horizon" - a shade of yellow that hearkens back to a previous colorway. I've admittedly been loud wrong being curmudgeonly and protesting a brand change before, but I remain unconvinced there was a need to stray from the previous institutional logo. Moreover, there's no need to incorporate the athletic mascot into the imagery of the institutional logo. If there was a change to be made, this ain't it, fam.

But if we whiffed on the logo, we doubled down on the messaging.

The website for our "new era" offers a hamfisted justification for the change. Our old brand "lacked awareness," citing meager numbers of parents and students who recognized the institutional brand. The one that literally  says "USF" and "University of South Florida" on it. A strawman argument that our brand lacked a consistent look presents a mosaic of identities including secondary and tertiary athletic marks (which will remain unchanged), division, unit, and student organization logos. In fact, that particular visual piece actually does a better job of showing how effectively the previous institutional logo shines through when used  for system campuses and academic units. It speaks of the story that's gone untold - again, unchanged by the institutional logo, but part of the brand packaging - and offers the backronym United we Shape the Future. Perhaps most egregiously, it positions as our primary belief "Ambition over Tradition." I wasn't alone in seeing that as a slap in the face to the many traditions myself and thousands of other proud alumni had the opportunity to help shape. It's not that I don't understand what they're going for: USF was founded more than a century after the state institutions we strive to emulate. The attempt is akin to that which Iota Phi Theta articulates far better with "Building a tradition, not just resting upon one". But to position ambition over tradition, rather than highlight our tradition of ambition, is a huge misstep in the eyes of many.

After the reveal of a logo they undoubtedly paid a marketing firm a whole lot of money to develop, they've been trying to make fetch happen in every venue, despite immense negative feedback from alumni and other stakeholders.

I am among them. 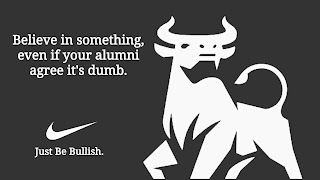