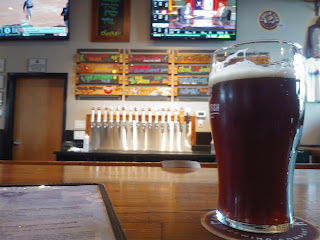 I went to Wake Forest's home opener this year. Winston-Salem isn't far by any stretch of the imagination, but it's off the beaten path enough that I tend to make plans to do something else when I'm out there. I also found myself in a predicament of circumstance; My car had been idling hot, making parking in stadium lots and the subsequent wait to get out not only inconvenient, but hazardous. I hatched a plan: I'd check out one of Winston-Salem's newest breweries - Incendiary Brewing - and then Uber from there to the game, for not too much different from the cost to park on site, with a fraction of the headache.

It worked out exactly as planned. So when I had occasion to be back in Winston this past weekend - this time for a Sixers-Hornets preseason game - I figured I'd repeat the feat. It just so happened that they were urging folks to get to the arena prohibitively early because the game, coupled with the Dixie Classic Fair, would cause considerable traffic delays. And while I'm typically down for fairgating, I already had fair plans with my family the next day, so I figured I'd reprise the brewery plan. This time it was Fiddlin' Fish Brewing Company. Looking back, I followed the same blueprint during my Belk Kickoff and Belk Bowl trips to Charlotte last year with the short walk to Unknown.

I'll still always opt for a tailgate when it makes the most sense, but when it doesn't, brewgating is the move.
at 5:20 PM