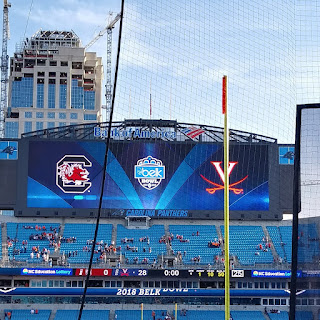 It may not have been much of a game, but it was quite the day.

I headed south to Charlotte for the Belk Bowl for much the same reason I went to the Belk College Kickoff back at season's start: It was there. But unlike the Belk Kickoff, I actually attended the Belk Bowl.

The day was gorgeous - mid 60s and sunny. So while the weather in North Carolina can be a mixed bag at this time of year, it showed up for two schools who, fair enough, were probably experiencing something similar at home. A noon kick made it a bit of a sprint to get down, parked, and in in time for pregame, but I caught both bands from a lower vantage point than my seats in the upper deck would allow. 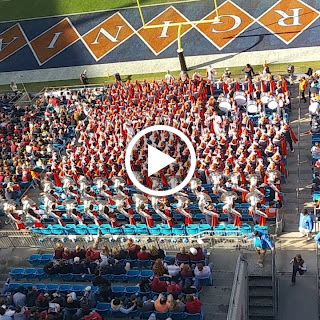 Virginia won the game 28-0, scoring a remarkably consistent one touchdown per quarter. Photographers will tell you that despite our love of sunny days, overcast ones actually produce better photographs. The same can be said for non-competitive games. The not full and emptying stadium provided me mobility to see both bands (and oh yeah, the game) from a variety of angles, including directly next to each. I had seen the Carolina Band before, in their house, but had only seen UVA in pep band format, often at the ACC Tournament (and most recently in Charlotte *cough*) Both were most impressive in the stands, but their halftime shows - Broadway from SC, Latin pop from UVA, were also enjoyable. From my perch atop the north endzone, I could see both shows without having to navigate a "home" vs. "away" orientation. 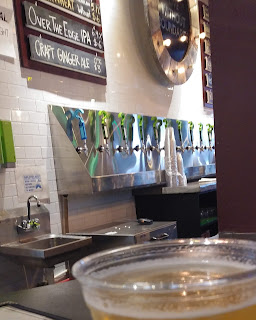 While I missed any pregame tailgating, I do have a new Charlotte football tradition (two times makes it tradition, right?) The Unknown Brewing Company sits a few blocks from the stadium, and became my postgame spot for the Belk Kickoff and now the Belk Bowl, where I caught the first half of the first playoff game. At some point I'll venture more thoroughly through their offerings, but perhaps due in no small part to their location, their low ABV, easy drinking beers are forward facing and enjoyable. Last time, the aptly name Pregame Pils was on special (though it was the Bright Ass Tanktop I brought home); this time it was the Feather Light.

Attending this year's Belk Bowl was mostly about scratching an itch. I realized late in the season that I hadn't been to a single game this year, and the Belk Bowl presented the last opportunity. It also made me realize that there's very little reason not to attend this bowl game each year. It was at its most accessible this year on a Saturday, but even barring that, it falls in the sweet spot between Christmas and New Year's Day. Expect to see me there again.