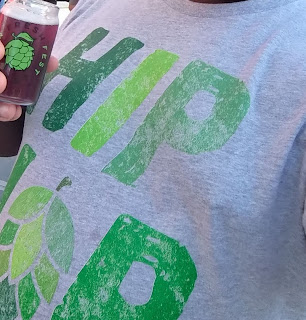 From the moment I made the decision to go, I had a feeling Fresh Fest would be my Essence, my All Star Weekend, my Honda (ok, Honda is always going to be my Honda)

However lofty my expectations were, it exceeded them.

I spent last weekend in Pittsburgh for Fresh Fest, the nation's first and only black craft beer festival. I got into town Thursday night, after driving up from Greensboro. I stayed in an Airbnb on the North Shore, situated such that I parked my car once and didn't move it again until it was time to go. I got in right around 8 and, since this was a beer-fronted trip, headed to the closest brewery, which was Allegheny City, mere blocks from where I stayed. Dinner came via the taco truck onsite, and I enjoyed a couple of their brews before heading back to my apartment for the weekend. 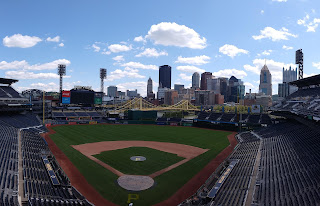 I spent Friday checking out the fair city of Pittsburgh. I started touring PNC Park, home of the Pirates (in a Pittsburgh Crawfords shirt as I had mentioned before) and then headed across the Roberto Clemente Bridge for a Pittsburgh culinary institution: Primanti Bros. That evening, I headed back out to catch a Steelers preseason game, where I of course had to catch the Pittsburgh Steeline.

Strictly Fresh Fest focused behavior began on Friday night with a meetup at Voodoo Brewery over in Homestead. There, I caught up with quite a few folks from a Facebook group I'm in for Black craft beer lovers and set the tone for the day to come.

Saturday was the day. My early entry pass got me in at 3 - two hours before the 5pm regular entry - and I began to realize the full potential of the event's vision and reality. The event was diverse by design, and as such was the most black folks I've ever seen at a beer event at one time, while still having an incredibly diverse crowd. There were a few breweries I made it a point to catch, but other than that I was trying to try as much as I could - and was relatively successful. The vibe was amazing. The courtyard - amazing on an 80 degree Pittsburgh afternoon - featured live bands, with a DJ inside. The breweries were in both locations, with food options in both places as well. I got to catch up with some of my folk from the night before, and check out what all was going on from each of the breweries and vendors. The event was extremely well run and all love. I got to shout passing thank yous at the two primary organizers, Mike Potter of Black Brew Culture and Day Bracey of the Drinking Partners Podcast, and dap up Mike. Musically the headliner for the night was Nappy Roots, and they sent us all off right.

Lord and schedule willing, this will become an annual trip. Fresh Fest's existence is to serve as a foil to the overwhelmingly white, male, and bearded world of craft beer, and it served as evidence that the rest of us are out there. I have a not-at-all unfounded fear of chasing that high at every brewery and beer event I attend in the meantime, but Fresh Fest showed us all what can be possible. As to its organization: With all due respect to Pittsburgh, a city I expected to like and had that expectation confirmed, Fresh Fest was born out of the organizers' locale, not necessarily the city's features. If you're looking to gather a critical mass of blackfolk, they easily could have gone with DC and Atlanta. Fresh Fest didn't seek a city that was already lit; they took their city and made it lit. What's more, from what I could see, the craft beer industry in Pittsburgh fully embraced the festival, partnering with collaborations and supporting the event. This year was only its second year, and I can't wait to see what's to come. One thing's for sure - it will be fresh.
at 2:06 AM