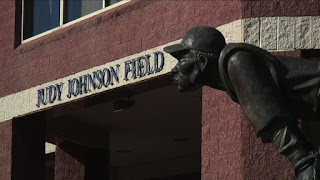 This August, I'm headed up to Pittsburgh for Fresh Fest Beer Fest, the nation's first and only Black beer festival. Since making the commitment to go, I've been planning the trip and getting a general sense of Pittsburgh. From a sports standpoint, I'll be headed to a Steelers preseason game, as well as touring the Pirates' PNC Park. I've also considered a way to pay homage to the local streets without perping.

The trouble is, I don't mess with Pittsburgh like that.

I mean, all indications are that it's a city I will thoroughly enjoy. I've long thought that geographically and topographically, it's a city with a lot to like. I've only been once before, a trip during college where I spent precious little time outside of the hotel or the recital hall. But my ties to metro Philly, metro Baltimore, and even USF (former conference rival of the Pitt Panthers) have made it a city a generally disregard a good deal of the time.

My solution? Rep for the Pittsburgh Crawfords.

The Pittsburgh Crawfords were one of a number of  Negro League teams that called the Pittsburgh area home. They played in Pittsburgh from 1931-38, and had lineups that included quite a few Hall of Famers, including some of the most well known Negro League players, Satchel Paige, Josh Gibson, and Cool Papa Bell.

Judy Johnson grew up in Wilmington, Delaware, not unlike Yours Truly. When Minor League Baseball returned to Wilmington in the form of the Wilmington Blue Rocks in 1993, the field was named for Johnson. Johnson also spent part of his career with the Homestead Grays, perhaps a bit more of a Negro League household name, but he spent the bulk of his Western PA stint with the Crawfords. So when I rep for the "home team" in Pittsburgh, I'll be doing so on my terms.
at 12:59 AM