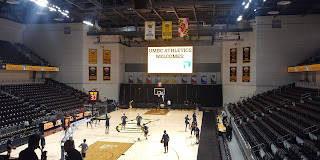 Barely a day and a half into the iconic month, I watched a team rally from down 18 at home to a game-winning three with 2.4 remaining on the clock.

And that was the undercard of the day.

I made the trip home to UMBC this past weekend for Spirit Groups Alumni Day. For the first time in four years, I was back with the Down and Dirty Dawg Band, and for two tunes, back behind the drumset. And yet this year, I came home to a different house. UMBC basketball has moved from its longtime home in the RAC to the new Event Center, which opened last season. The upgrade is significant.

I arrived and made my way to the rhythm section. One of the biggest changes was that the drumset, previously on the floor level, is now at the top of the section. It made it a bit challenging for me, as a not-tall drummer, to see the director without positioning myself just so; I imagine this is the challenge commentators often talk about with short quarterbacks and seeing over their offensive lines. The current band was great - I know they would be - and I met several more recent alumni as well.

At some point too late to make a bigger deal about, I realized that this with the band having begun in 1998-99, this was the 20th anniversary season. I joined in its second year. I mentioned this to the current drummer who noted, "The pep band's 20? I'm 20."

I got to experience some of the band's new traditions, chants and charts, and bring back a few from my way. Ray Lewis popularized the "What time is it?!" chant during his career in a stadium not far from our own, and we adopted it as the very dawgs in the house he references. Thankfully, it's well known enough that everyone caught on as I reprised it for Alumni Day.

The game, as I mentioned, was an exciting one. Despite recent success, I spent enough losing seasons behind the drumset that I've never considered a win a given, nor a prerequisite to enjoying a game. At the point that we were down 18 in the 2nd, I was fully expecting to add another L to my UMBC hoops watching experience. That was not to be; the team rallied, ultimately winning by three on a near-buzzer beating 3. Our former post-win tune was a mashup of 3 Dog Night's Celebrate and Kool and the Gang's Celebration. These days, unsurprisingly, it's T-Pain's All I Do Is Win.

There was only one returning alumnus who I truly overlapped with in my time in the band, and several others I had met in previous trips home. Still, the bond of shared experience remained between me and those who I was meeting for the first time, or had never met. I had the slightest hesitation in headed to the after-afterparty at PubDog with alumni as much as a decade and a half my junior, but as I knew, the beat goes on, and I had a great time with some fellow alumni. The rest of the trip was a nice roll through southeastern Baltimore County as well - both Heavy Seas brewery and Guinness' US branch are in Halethorpe, mere minutes from campus and where I was staying.
at 4:50 PM