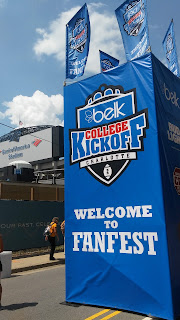 Ask a college football fan about regular season neutral site games, and you're likely to get mixed reaction. Nearly everyone respects the mainstays: Texas-Oklahoma in the Red River Shootout in Dallas, or  Florida-Georgia in the World's Largest Outdoor Cocktail Party in Jacksonville (neither of which like being called that). But be it ever so humble, there's no place like home, and many would prefer to see the often high-profile matchups that are reserved for neutral site games observed as home-and-homes, where the cadence of gameday literally marches through campus.

I can understand this - if only in theory. I went to USF, where all of our home games are played in an NFL stadium, so I don't have the same attachment to campus on fall Saturdays. Lacking that nostalgia, I find the season kickoff neutral site games exciting. The bowl game/classic atmosphere is almost always a two band affair, with plenty of festivities surrounding it. Several of the major indoor stadiums - Atlanta, Arlington, and Houston - have been hosting for years. Charlotte joined the fray a few years ago, as did Orlando, with a pair of games that don't seem to be going anywhere, and I'm here for them.

During 2018's opening weekend, I headed to to Charlotte to soak in the festivities of the Belk College Kickoff. This year, the game pitted Tennessee against West Virginia. They couldn't have asked for a better matchup.

Charlotte sits at the crossroads of the Carolinas, with Bank of America Stadium sitting a scant dozen miles from the South Carolina border. The Belk Kickoff formula to this point has been an interstate matchup, with South Carolina taking on UNC and NC State. Of the scheduled games to come, seven of the eight teams will hail from the Carolinas, with Notre Dame being the outlier. I don't know what made them stray from this formula, but it was a strong move and one they ought to go back to. Both teams and fanbases, and especially the combination thereof, made for a great gameday atmosphere.

Despite numerous geographic and cultural similarities, Tennessee and West Virginia had never met before this season's matchup. Charlotte provided the venue that brought the two together. Country Roads vs. Rocky Top. Two football and tailgating crazed fanbases descended on every corner of the city in a game I'm sure was lucrative for all involved. The gate showed it - 15,000 more spectators than the next closest game. Because they weren't making quick day trips from Columbia, Chapel Hill, or Raleigh, I'm sure they sold hotel rooms as well. And I'd wager the NASCAR Hall of Fame made out alright that weekend.

True enough, Charlotte's not one of the shiny new domed stadiums the NFL boasts; nor is it a subtropical location and perennial bowl destination with the Happiest Place on Earth down the street. But in my opinion, the city's been selling itself short by sticking to Carolina matchups. Charlotte's got a lot (its Convention and Visitor's Bureau would commend me for saying) and if they're not otherwise seeing themselves as a destination, they should be. Loyalty to the bi-state region you call home is one thing, but it's also convenient to the entire South Atlantic. With that in mind, I've been trying to think of other matchups with a similar cache for a Charlotte matchup. Anyone want to try UGA-Virginia Tech on for size in a future year? I think it would do damage.
at 1:26 AM