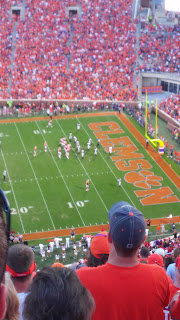 Remember that little thing I wrote about whether Nick Saban should keep playing Jalen Hurts or sit him after the 4th game, allowing him to retain his redshirt?

While the situation at Bama was a non-story, there was more to be said at their perennial playoffmate Clemson, where head coach Dabo Swinney named freshman Trevor Lawrence the starter following the fourth game, putting the ball in Kelly Bryant's court. Bryant made the decision at that point to leave the team, preserving another year of eligibility upon his transfer after his graduation this year.

Many view the move to name Lawrence the starter at that time a coup de grace from the generally well-regarded Swinney. Playing in another game could have cost Bryant the opportunity ever to start a college game again, barring injury or otherwise to Lawrence.

...Which is precisely what happened.

No sooner had Bryant left the team than Lawrence left the Syracuse game with an injury. Third-turned-second string QB Chase Brice performed admirably, but the internet -and I'm sure the orange clad in the stadium - clamored for Bryant in that moment. But he was already gone, baby, gone.

While Swinney's decision to give Bryant dominion over his own future was lauded, it should be noted it was no different than what Saban had already done. Bryant wasn't cut from the team, nor was he handed a promise that he wouldn't be played. He was simply given a clear picture of the lay of the land and given the opportunity to make his own choice. Jalen Hurts had already been given a similarly prospectus as Tua Tagovailoa had taken every start to date for Bama. He could have made a decision similar to Bryant's if he saw fit.

But the fact is, the two men's futures are not identical. Hurts had at least a year of eligibility ahead of him regardless of this year's outcome; retaining a redshirt would have simply meant two. In contrast, Bryant remaining a Tiger would have meant playing out his days - or not, depending - in the South Carolina upstate.

This is the first year of the new redshirt rule, and it's led to some foreseeable and possibly less foreseeable outcomes. One thing is for sure: This won't be the last we hear of it.
at 12:28 AM