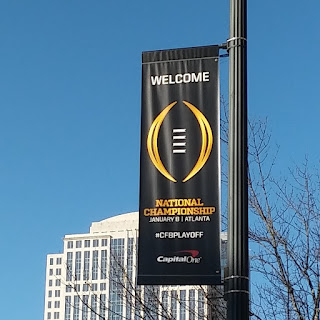 There have a been a few story lines in the past week or two with championship implications, or at least the illusion thereof.

First: Last week, when Boise State lost to Oklahoma State, more than one Worldwide Leader commentator noted that it was the end of the Group of Five's chances at the College Football Playoff.

It's revisionist history. No such access ever existed. An undefeated Boise State would have been on the outside looking in just like an undefeated C. was last year. The system would not have granted access. It's not designed for that. So while it makes for a convenient talking point after the fact of "what could have been," it never would have been.

In other news, there's a storyline I realize was only entertained by those operating in theory, not practice. As most know, national champion quarterback Tua Tagovailoa usurped national champion quarterback Jalen Hurts for the starting position at Alabama. Like many, I weighed the romanticism that Coach Nick Saban's grace stroke would be to play Hurts in fewer than four games, allowing him to retain an additional year of eligibility. Hurts, who will graduate this year, will likely transfer at the end of the year and could play two years elsewhere if his redshirt were retained. It was an idea I found romantic - Saban looking out for his former starting quarterback, even if his extra year would be spent elsewhere.

It was a fool's errand.

The fact is, what I had romanticized was a college system that would have Hurts continue to play for well below market value. Another year in college would be another year not getting paid. The fact is, there's a good chance Hurts has a professional future in some capacity, and even at a league minimum and a cup of coffee in the league, he'd be making more than he would be in college. It may take whatever play he gets for the remainder of this year, and even his bonus year elsewhere to put his best foot forward, but expecting him to capitalize on two more years is simply asking him to give up another year for free. Hurts would do well to be a part of this year's Alabama team - possibly even earning another ring - and either try his hand at the upcoming draft or pick another school at which to shine.
at 12:34 AM