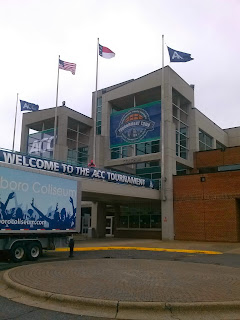 There's been quite the flight out of the state that boasts of being first in it.

Back in March, the North Carolina legislature passed HB2, a bill that, among other things, requires individuals to use the bathrooms that correspond with their sex as listed on their birth certificate, regardless of gender identity. The bill's original passing garnered criticism from many, including many in the sports world, but in the past couple of months, leagues have been voting with their dollars, hitting the state majorly by moving events elsewhere.

The NBA took flight first, moving the 2017 All-Star Game originally scheduled for Charlotte. New Orleans is the beneficiary (sound familiar, Hornets fans?) despite Atlanta dirty macking on the game as far back as April. But two more shoes dropped in the past week: The NCAA pulled out all non-campus-based tournaments and championships; of most impact to me was the first and second rounds of the NCAA men's basketball tournament, scheduled for here in Greensboro. But in the most meaningful move yet, the ACC pulled its championships from North Carolina, including the football championship from Charlotte and the women's basketball tournament from Greensboro. That even this league would pull from North Carolina is particularly telling; the ACC was founded here in Greensboro and has called the state home for 63 years. Four of its prominent institutions, including perhaps the nation's biggest basketball rivalry, are located here. Their willingness to take this stand speaks volumes. No word yet as to where either is headed, though sources (and I've got my own, not just Brett "Sources" McMurphy) say football is in talks with Camping World Stadium in Orlando.

While I'm sad that I'll miss out on the events, I'm happy to see these leagues take a stand.
at 9:00 PM