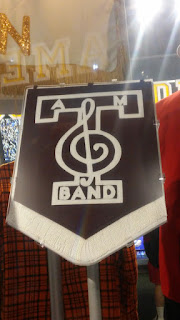 Well well, I haven't had much to say over here since the round of 64 in the NCAA men's hoops tournament, and now we're in a whole new hosts of sports. I've had enough topics of interest to at least give a series of short notes.

-After an epic finale - and a strong tournament overall - the Villanova Wildcats are your 2016 Division I men's basketball champions. The Philly sports fan in me is thrilled, naturally. So is Roxanne Chalifoux, AKA last year's Crying Piccolo Girl from Villanova.
-The week/end that followed the Final Four should have been of great interest to someone with my broad interest - sports and the marching arts - but of reasonably little consequence in the specific. Sorry Masters, MLB, and WGI. My wife however, is back in her element, watching O's updates on her phone.
-I had occasion to visit the College Football Hall of Fame during a work trip to Atlanta. I caught it before the move as well, back in South Bend. While the whole Hall is great, I will admit to being the guy taking the pictures of the band stuff.
-LSU - you know, the same school that played fast and loose with Les Miles' livelihood this past football season - has placed band director Roy King on administrative leave.
-Satellite camps have been banned by the NCAA, effective immediately. It's been noted by many that for them to have been defeated, some had to vote against their own self interest. 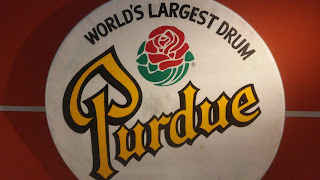 -In other NCAA football news, there's a moratorium on new bowls for the next three seasons. Good, say I - there are too many already.
-The NBA will start including ads on jerseys in the 2017 season. From my admittedly limited scope, I don't see the cause. The sports one associates most closely with advertising - soccer and NASCAR - also have limited breaks in the action for actual commercials. the NBA doesn't have this problem.
-Last but far from least, the 500 pound gorilla in my North Carolina World: HB2, a shameful piece of legislation that garners most of its press from its implications on bathroom use for transgender folks, but goes much further to restrict the rights of North Carolinians and the state's municipalities. First, to draw a sports analogy: The bill itself was rushed through a special session as opposed to being given due consideration by the legislative body. While I thought for a moment our governor may consider a veto on grounds of its overreach, its haste, or its business implications (which I'll get to in a second), it turn out he was waiting at the Hoosier Dome for the Mayflowers to pull up.

In a sports context, both the NBA and NCAA have issued statements admonishing the bill, and each has some pretty major skin in the game. The NBA is slated to host its All-Star game in Charlotte in 2017. It looks like it's going to stay, despite Atlanta's public dirty-macking on the event. The NCAA will host first and second round men's basketball tournament action here in Greensboro in 2017, though them making a political statement wouldn't be unprecedented; South Carolina just got its postseason rights back after removing the confederate battle flag from the state house grounds.
at 12:25 AM