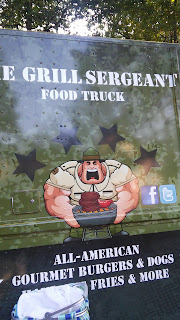 After about two years of doing weekly High Notes, I decided to open up the playbook, for noteworthy weekend happenings that were beyond just marching, but were in other adjacents like tailgating, food, travel, beer, and the like.

The funny thing is, I don't think I've every explicitly noted football, except when it was paired with the band performance.

One of this week's high notes changes that. in the late-but-not-too-late hours of Saturday night, I got to witness a bit of Pac-12 After Dark, as the Stanford-UCLA game was at a reasonable 8pm local time for us east coasters (though I'm not gonna lie, I still stayed up for the far less reasonable Arizona State-Cal game). The ending was great by all accounts, unless you're a gambler and lost out on Stanford's front door cover. Still, that the Cardinal found a way to win on a late game drive down the field was the sort of thing those of us with an east coast bias tend to miss out on.

Call me basic, but I've long loved a good fall festival, and North Carolina is not in short supply this time of the year. My kids and I went to two here in the Triad, though from their standpoint, I took them to a couple of fields they delighted in running around.

Finally, this weekend marked the opening of the Smithsonian's National Museum of African American History and Culture, and in a clip I sadly only saw in Instagram's story (so it's gone now), Howard University's Showtime Marching Band was there, fittingly, to help celebrate.
at 5:48 PM