To Be Young, Gifted, and Black 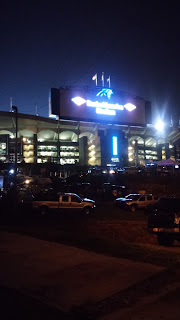 With all pardons asked for referencing a particular pachyderm in the same sentence as a former Auburn quarterback, race has been the elephant in the room for all of Cam Newton's almost-certain MVP season. It has been the undercurrent, consciously or unconsciously of a lot of the criticism he has received this season, and because his season is longer than all but one other quarterback's, so it continues.

Newton is, of course, far from the only black quarterback in the league, nor is he the only black quarterback to reach this level of success. In an interview on Mike and Mike, Ryan Clark expressed that it's not an issue of race, but of culture. After all Russell Wilson, who earned a Super Bowl ring two years ago and came close this past year, is Cam's contemporary, also a black quarterback, and hasn't gotten the same degree of scrutiny that Newton has. It's worth noting, however, that Wilson's teammate Richard Sherman has. Sherman shares with Newton a certain panache - swag, if you will - that is offputting. It's cultural, certainly, but the fact that it is expressed by a black man is no small part of the equation. It's true: Cam dabs, smiles, and dances; he also gives game balls to children and is a presence in his community. Still, the former is cause enough that there's something "not quite right".

SB Nation's Spencer Hall - one of the finest writers of our time, in my opinion - remarked on a different cultural phenomenon: That of the southern gentleman. He notes that his Super Bowl opponent, Peyton Manning is less his foil and more his kinsman. The parallels of being SEC quarterbacks and number one overall picks are noted, but less often stated is that Cam is southern. This is likely because one definition of being southern - not the only, mind you, but one that tends to stick - may omit the word "white" from its spoken qualifiers but never from the imagination. Newton is southern in a way that's not necessarily thought of as such because the prevailing qualifier - black - never goes unstated.

Show style marching, as done at this country's Historically Black Colleges and Universities, is almost exclusively a southern art form. Owing directly to the legacy of their founding, the overwhelming majority of HBCUs are located in the south. Whether you're at Clark Atlanta or Tennessee State, FAMU or the eponymous Southern University itself, the style was innovated and continues to be carried out in the south. And yet, while Jackson State and Jacksonville State are but 4 1/2 hours of I-20 away, the Sonic Boom of the South an the Marching Southerners - note how both carry the region even in their nicknames - are worlds apart with respect to marching.

The styles are different, but different doesn't always come without value judgments. Familiarity may lead to stylistic preferences, but it may also lead some to believe that one is "right" and another "wrong". It's part and parcel with the hoopla when Drumline came out: The style depicted was unlike anything the average corps style marcher had ever seen, and so it had to be wrong. But even when Bethune Cookman's tonal basses are doing Blue Devils-quality runs, or A&T closes with a Cadets-style company front, there is still an unease for some. Score sheets, like standardized tests, are normed on a predominately white experience; so too is Cam's conduct and adherence to the "unwritten rules" of playing the role of quarterback, which is normed similarly. But like the HBCU band, Cam is first and foremost having fun with what he's doing, and largely putting on a show for those who came to see him. It's not just for judges or just for points, though there's no shortage of those. He's here to move the crowd. So when you dab on 'em, Cam, make sure you're hitting 90 degrees.
at 5:16 PM