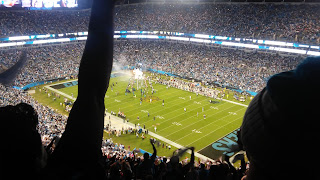 While I would've liked the Eagles to have halted the Panthers' path to 6-0, I can wish them well now that they're there.

Earlier, I made the statement that objectively, I could expect the Panthers to win; good thing sports fandom isn't objective. I felt a good deal better after the Eagles pulled their record even with wins over the Saints and Giants, but despite what the "weakest undefeated" narrative had to say about the Panthers, they were still a relative juggernaut when compared to the struggling Eagles. While I wasn't content to "keep it close," I was pleased that the game remained a game for its entirety.

But let's back up a bit. The beauty of a night game is, of course, the ability to tailgate all day. I left Greensboro, and thus made it to Charlotte, later than I had intended, and the rest of my crew was already in the lot. Thankfully, they had been able to save me a spot, so I pulled in and first pulled out the grill (since I was the one holding that piece up) and later set up my pro-Philly accoutrements. This was my first time getting to fly the flags my brother had flown over Afghanistan for me - an American flag and an Eagles flag (he got me a Delaware flag as well). We had Panthers fans to one side of us and some fellow Eagles fans to the other - folks from all over central and south central PA, now settled in the Carolinas. Our crew was mixed company; I wasn't the only Eagles fan, but it tilted, understandably, towards the blue. 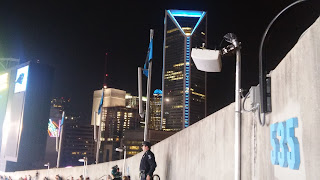 I've joked before about having front row seats for the flyover, but we were literally in the very last row in the stadium. This did highlight the fact, however, that there's not a bad seat in the house.

A few game notes. First: Sam Bradford is not good at the football. But somehow, perplexingly, he's not quite bad at it, at least not bad enough to get pulled. Secondly: Luke Kuechly is really good at the football. Despite living here in NC, I don't pay much attention to the Panthers, so while I knew the hype surrounding Kuechly, I didn't have a gauge for the degree for which it was founded and then some. I looked at his stat line after the game and realized he wasn't even the Panthers' leading tackler on the night, but that game was his season high, and he had a ball hawking ability that was, well, fruechish. I'd love to see a map of his tackles, because they came from everywhere on the field.

Again, the Birds kept it respectable, but ultimately fell to the now 6-0 Panthers. For most of the game, there were chants of E-A-G-L-E-S EAGLES! and we even sang the fight song after our lone touchdown. There were remarks about how quiet we had become at game's end, but ultimately there were very few jackwagons on either side of the line of scrimmage. I battled traffic getting out of the lot, but it was smooth sailing back up to Greensboro.

Sadly, that may be my one game for the season. Circumstances are keeping me form USF-ECU next week, and there's nothing else foreseeable on the horizon, But hey, a USF bowl game could still possibly be within reach.
at 12:00 AM