We're a good three weeks into 2013; I suppose it's high time I did last year's year in review, eh?

SoCon Tournament - after UNCG heated up to end last basketball season, I decided to make the trip west to Asheville for some SoCon hoops. I caught a day's action, which for me meant four games and eight pep bands. Definitely a trip worth making; got some good pictures and video too.

Mr. Parets' Retirement - I made the pilgrimage to Delaware as my esteemed former high school band director celebrated his retirement after 36 years at the helm of the Alexis I. duPont High School Tiger Marching Band, a career that included multiple trips to the Rose Parade, St. Patrick's Day in Dublin, the Lord Mayor's New Years Parade in London, and the Vatican, but most importantly, touched the lives of thousands.

Lacrosse in Charlotte - While clearly not known for being a hotbed, I did catch a couple of lacrosse games in Charlotte. American Legion Memorial Stadium played host to the ESPNU Warrior Classic, a college lacrosse double header featuring Rutgers vs. Syracuse and Hofstra vs. UNC. Two weeks later, a new era began as the Charlotte Hounds opened their first ever Major League Lacrosse season against the Denver Outlaws. 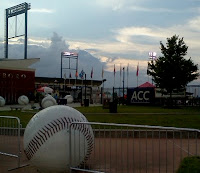 ACC Baseball Tournament - this one was a bit of a whim, but I'm glad we did it. NewBridge Bank Park, home of the Greensboro Grasshoppers hosted the ACC Baseball Tournament here in Tournament Town. it was a beautiful night, and we caught Wake Forest vs. UNC, for free, actually, thanks to the kindness of some strangers. What's more, the ballpark has a playground, meaning Anastasia was plenty entertained as well. 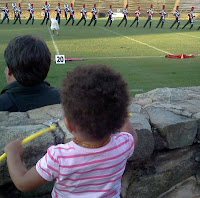 FirstBEAT and NightBEAT - While I thought this would take place last summer when she was an infant, Anastasia attended her first drum corps shows this past summer. She brought her drumsticks and was playing along. Brainwashing in effect. 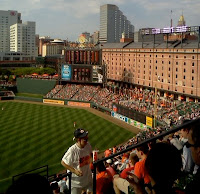 O's game - when up in MD visiting over the summer, we took in O's vs. Indians at Camden Yards. While that particular game was a setback, it was cool being there for part of what turned out to be a monumental season for the O's. It was damn hot that day though - I was further Baltimored out in an UnderArmour UMBC polo.

CrownBEAT - I was fortunate that there were three DCI shows in the Carolinas this summer, the last of which was a mere hour away in Durham. Instead of paying to attend this one, I took the opportunity to be a lot rat, catch warmups, and get some video that's up over on the YouTube page.

USF vs. Temple - We made a "what-if" a reality and paid a visit to my home turf in early October to see my parents visit Eastern State Penitentiary, and of course see USF take on Temple. Tailgated with some fellow Bulls and took in a game in the stadium where my pro team plays. USF lost this one, which seemed to be about par for the course this year.

SC State vs. NC A&T - It's just this side of shocking I hadn't been to an A&T game before, considering they are across town, have football, and more importantly, have a stellar marching band. I picked this game intentionally for the 2-for-1, as I knew South Carolina State's Marching 101 was traveling, and I was treated to a great band battle with a side of football. Footage from this on YouTube as well.

ACC Championship - My friend Josh from Miami was in the general vicinity on championship weekend, and he didn't have to twist my arm too hard to convince me to head to the ACC championship game. Ironically, James, who's an FSU alum and lives in Charlotte, found himself unable to go because of work, but we still got to hang out with him both before and after the game, and he got to see his team in the Orange Bowl, so all's well that ends well.

Biggest Surprises
USF Football - Sadly, I've grown quite accustomed to the midseason collapse from the Bulls. I didn't see it starting in the 3rd game and not letting up all season. With Skip Holtz dismissed at the end of the season, I'm hoping for greener pastures with Coach Taggart.

Realignment - I'm not so much surprised that it reared its head once again as how it came about. The Big Ten reaching extraregionally and grabbing College Park and Rutgers crushed about the last I ever knew about regionality in college sports. The subsequent blows - Louisville to the ACC, the Catholic schools leaving - help solidify the Big East's role as an also-ran conference for the foreseeable future, and that's if a conference bearing that name even continues to exist.

Looking Forward to in 2013
Hoops trip - I made the commitment to finally make it back to UMBC for pep band alumni day, almost 10 years to the day from the last time I touched a drumset in the RAC arena. I'm tentatively planning to try and pair it with a couple of other college hoops games on the way up to Maryland, and my boy Brian may be joining me.

MLL All-Star Game - Major League Lacrosse is bringing its All-Star Game to one of its newest markets, Charlotte. I plan on making my way down for it.

Indy? - It's not yet a definite, but my wife and I have mentioned the possibility of going up to Indianapolis for DCI World Championships. My brother-in-law lives there, and we'd like to get up to see him, so this would make for a great excuse to pair the two.

Random Acts of Football - While I don't yet have the means for a full season tour, my friend James, with whom I've typically hit FSU games, and I have talked about taking in some games to which we have no apparent connection. We hope to catch at least one this coming season.

Email ThisBlogThis!Share to TwitterShare to FacebookShare to Pinterest
Labels: Year in review