Green on Saturday, Green on Sunday 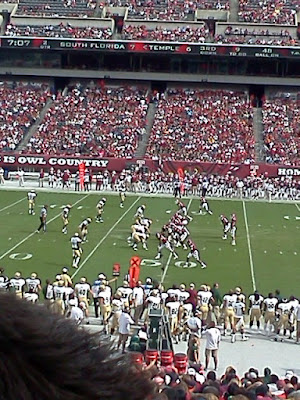 This past weekend, my wife, daughter, and I made the trip back up north for, among other things, USF's football game at Temple. It was the return to the Big East for the Owls, but more importantly, it was a USF game on my stompin' grounds. So after planning for a weekend that included visiting both families, tours and haunted house at Eastern State Penitentiary, and the Maryland Renaissance Fair, we headed north.

We departed from my parents' house in northern DE and made it to the stadium before 10. I pulled up next to a few fellow Bulls, currently living in the Philadelphia area, and took down the USF flags that had flown up 95. When they asked why, I shared that despite being a Philadelphia-area sports fan, I trust them about as far as I can throw Andy Reid.

It was my plan to fly an Eagles flag with my USF stuff, both to represent my "green on Saturday, green on Sunday" loyalties, especially in the shadow of Lincoln Financial Field, and potentially show the Philly fans that I'm a friendly. Still, as much as I half-expected from Temple fans, I didn't have any problem with the Temple fans I encountered--in fact, despite sharing space, there was very little interaction with them.

My tailgating plans were to catch up with Collin of Voodoo Five fame; Collin's also a Philly-area native and wasn't missing this one. I met a few other Bulls in the lot while attempting to connect with Collin and his crew. It was full of Philly accoutrements; I knew I was home when I grabbed a Yuengling from the Wawa cooler. He had soft pretzels on deck as well. Big thanks to Collin and his crew for excellent tailgate hospitality, especially since packing for the full trip meant I was decidedly light on my own tailgate gear.

It was homecoming at Temple, which meant several campus entities had their own tailgate tents set up. On the way to the stadium we were able to keep the Philly party going with Tastykakes. We headed up to the gates and a misdirection to the will-call got us in a little later than expected. It was my intent to catch all of Temple's pregame because, well, duh. I caught some of it upon entering the stadium before heading to our seats, which were pretty much right on the 50 on the visitors side.

The last Philly sports stadium I had been in was Veterans Stadium, so clearly this was my first time in the Linc. Maybe it was the Temple setup, or the manner in which you enter, but it felt small. It felt cozy. It felt like home. And in addition to being an Eagles fan, I've got an idea why: Temple, like USF, plays in an NFL stadium. In fact, watching a team in red try to fill a green stadium isn't unlike my own team in green in its home red stadium. Despite the Eagles playing across the state at Pittsburgh that weekend, the Owls played over faded Eagles end zone and midfield markings instead of their own. Certainly I know that feeling.

As I mentioned in High Notes, I was impressed by Temple's band. They brought it in the stands, and at least from my vantage point across the field, they had decent sound output, though I don't know if part of that is favorable acoustics at the Linc or the relative quietness of the stadium. I don't know that they're next up in line for the Sudler, but few are, and the Diamond Band was thoroughly enjoyable both on the field and in the stands.

Like I said, I really didn't have any problem with the Temple faithful, with two small exceptions. The first didn't impact me at all really. A few rows ahead of where we sat were a few other Bulls fans. One was perhaps as negative the entire time as anyone who calls himself a fan, but I don't recall him using any foul language. Someone did, it seems; there was a snitchuation in which one of the stadium security came over and told him to watch his mouth following a report he had received. Look, I'm all for being respectful, especially when there are children around (I don't think there were) but particularly in that stadium, the drop-a-dime hotline, especially for language, is pretty laughable.

The second came as we left our section on the way out of the stadium. Some college age guys in the section about them were yelling down "South Florida Sucks!" at everyone who left our section. Yeah, thanks, guy.

The Bulls did, of course, suck. Despite dropping three in a row, I had convinced myself that if that was our usual season slump, I'd take it because we could stil come out on top in conference. After not getting the job done at Temple, we fell to a sadly familiar 0-2 start in the Big East and currently sit as a 3 point underdog to some team called BYE this week. To the Owls' credit, they were fired up about returning to the Big East and definitely showed up to play. The Bulls, on the other hand, continue to not be able to get it done. So while I saw the home team win in Philly, it wasn't the desired outcome for me this time through. At leaset I was able to grab a cheesesteak on South Street before leaving the City of Brotherly Love.
at 12:19 AM