You'll note there was no Week 5 recognition; I was at a conference that weekend and didn't catch and football or football-related activities, though in a pinch, I'd recognize the Dixie Classic Fair, which I visited with my wife and daughter on Sunday. Similarly, this week's travels didn't allow me any televised football. Lucky for me, there was one clip in particular that hit my Facebook and Twitter feeds too often to be denied. Not that Ohio State's TBDBITL hasn't always been stellar, but it seems they got tired of their statemates, the Ohio University Marching 110, being the YouTube Champion and put together a show with plenty of viral potential of its own. And who doesn't love a good video game show? 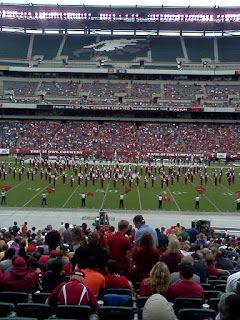 While I didn't catch any football on TV, I did make it to a live game and saw my USF Bulls take on the Temple Owls in Philly. I've noted before that me being present live does not guarantee a band High Notes recognition (sorry, Wake Forest) but this week, I think Temple is worthy. Temple's Diamond Marching Band toes a line that I feel certain predominantly white institutions can do well: They can play hip hop, soul, and funk tracks without it sounding forced, while still remaining true to their corps style roots. In the stands, Temple hit us with All of the Lights (which they put on the field last year) as well as Forgot About Dre. Their halftime show was Aerosmith, and while I was on the backfield side, it seemed quite well done, and despite the bells facing away, they had plenty of sonic output to carry. Further, it was Homecoming at Temple, so they ended by being joined by folks who dusted off their clarinets and borrowed fiberglass sousaphones (and at least one contra) from the local high school to take the field once again. This piece was also well done.
at 8:06 AM