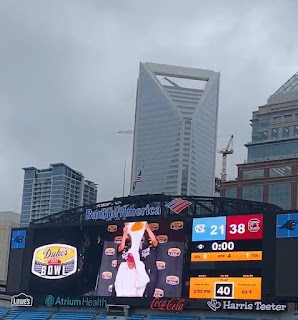 (It's only an Almost-Preview because the Bahamas Bowl is already underway, but neither team even sent a band, so they don't count.)
Happy Bowl Season to all those who celebrate! It's the most wonderful time of the year, and the games are underway. The Final Four will be the #bowlbands preview treatment like usual, but I wanted to note a few things that caught my eye this postseason:

-This year's Dual Sudler count - games that match a pair of Sudler Trophy-winning band programs - is at five; six if Michigan wins its semifinal game and goes on to face either Georgia or Ohio State in the championship. Even at 5, if's the most since 2015-16.

-Cincinnati and Louisville, who shared several conferences before Louisville's move to the ACC, will renew the Keg of Nails rivalry in the Fenway Bowl.

-Although Deion Sanders has already taken the head coach job at Colorado, he will coach Jackson State one last time in the Celebration Bowl in pursuit of the Black college football championship. They'll face NC Central, who currently has the dubious distinction of being the only MEAC school to have lost a Celebration Bowl. Sanders and Jackson State seek to right last year's loss to South Carolina State.

-There are two bowls that are typically in reach for my usual holiday season schedule: The Military Bowl in Annapolis, and the Duke's Mayo Bowl in Charlotte. Travel this year puts me in the opposite location for each. I briefly considered heading to the Myrtle Beach Bowl instead, as it's the closest to me at time of game, but I won't.

-Military Bowl is Duke vs. C.Florida. Can they both lose?

-Duke's Mayo Bowl gets a Big Ten team every other year, which excited me from a Big Ten bands perspective. This year's team is Maryland, which gives the matchup with NC State an old ACC feel.

-Word is if the Terps win the game, they're mixing in Old Bay for the mayo dump. I support it.

-Syracuse takes to the Big Apple in the Pinstripe Bowl, which just feels right.

-After the passing of Coach Mike Leach, it's melancholy that Mississippi State will play in a stadium with a pirate ship in it.

-Playoff victories by both Michigan and Ohio State will give us a second playing of one of the biggest rivalries in all of sports, this time with a championship on the line. What's more, it'll be just over nine months after we saw UNC and Duke meet in the men's basketball Final Four. Those riches from less than a year's time in the sports world would be unmatched.