Our Kind of Folk 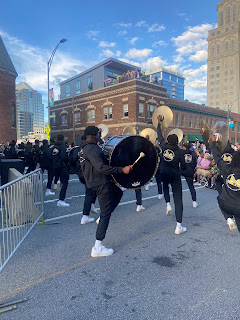 Last night, I headed out to the North Carolina Folk Festival to catch Cold Steel, the Drumline of North Carolina A&T’s Blue and Gold Marching Machine.
That’s not where the story begins.
The National Folk Festival has been going on since 1934. Produced by the National Council for the Traditional Arts, its model has brought the touring festival to more than 30 cities for a three year residence. The festival called Greensboro home from 2015 to 2017.
After its stint here, the city and state saw fit to keep the part going, launching the North Carolina Folk Festival in Greensboro the following year, as a few other host cities have done. Except for pandemic challenges, the NC edition has been going strong ever since.
But is a collegiate drumline “folk music”?
Absolutely.
Folk music conjures up a very specific image for a lot of people. In the US, it may include acoustic guitars, perhaps banjos. Internationally, it may feature traditional instruments of the home country or region. But on its face, folk music is exactly that: the music of the folks.
To that end: the collegiate marching band is very much folk music, and the HBCU marching band even moreso - a quintessentially American art form with its roots here in the south. Both iterations of the folk festival, both in Greensboro and nationwide - have cast a wide net for folk music such that it has included KRS ONE and George Clinton. As Cold Steel takes the festival stage once more, it continues an inclusive tradition that reinforces that folk is for everyone.
at 4:56 PM