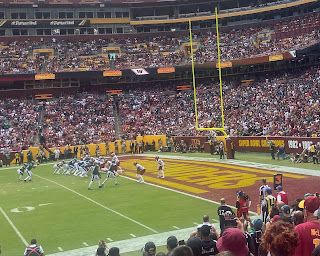 All the way live from the 215...
...or at least, it may as well have been.
After more than 11 years of being at least across the country from home, my younger brother, who's in the Army, is back out on the east coast, living in NoVA.  One of his first orders of business was to get ticket for Eagles at Commanders.
My weekend up in the DMV included some time with extended family as we celebrated my aunt's 75th birthday. But Sunday was gameday and we headed over to Landover for the game.
I had a reasonable suspicion the Phaithful would make a good showing - we travel well, FedEx Field is a mere 2 1/2 hours down the road from Philly - event closer for those transported further south in the Mid-Atlantic - and I heard from Philly sources of planned bus trips down. Still, I would not have anticipated what I'll conservatively call at 60-40 split in favor of the visiting Birds. 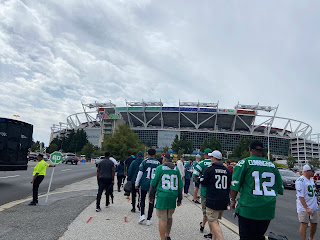 We arrived in the lot to a sea of green, walked up to the stadium with the same, and ultimately took our seats on the visitor's side among friendly environs. And while one might expect that from the visitor's side, the Eagles majority rounded both end zones, seemingly leaving the home sideline as the only section with a majority in burgundy and gold.
The Birds dominated the scoreboard like they did they stands, ultimately notching a 24-8 victory, with Washington's only points coming on a safety and a (questionable?) touchdown with a missed two point conversion. Former Eagle Carson Wentz succumbed to nine sacks and completed 25 of 43 pass attempts.
This was the first division game and only second "home" game with the team sporting the Commanders moniker. Fan gear was a mixed bag; many had Commanders gear,  but there was still plenty of their two previous names as well. I was curious about what lyrics the fans would use for the fight song - the rebrand has shoehorned "Hail to the Commanders" into the classic tune - but we didn't get to hear it enough for me to know.
And, of course, I was looking forward to seeing the oldest marching band in professional sports, the Commanders Marching Band, carrying on a legacy that began in 1937. The band took a hiatus for the 2020 and 2021 seasons, amid both the pandemic and the team's rebrand, and the unit that took the field yesterday marched around 30 winds, and street uniforms of black shirts, burgundy polos, and black ballcaps sporting the Commanders logo. They were mic'ed in both field and stands, and took their stands perch above the side 1 scoreboard, getting a few features during timeouts.
FedEx field gets a bad rap as a dump of a stadium, but my experience was enjoyable, if not basic. Concessions were ridiculous, as is to be expected, but I didn't encounter any falling apart guardrails, at least. Beyond good natured jeering, I didn't witness any bad blood from either side among division rivals - the early season nature of the game and Commanders' fans pre-resignation to a loss likely played into this. The game was a good time, and with my brother living in the area now, there's a good chance we make the trip again.
at 2:11 PM