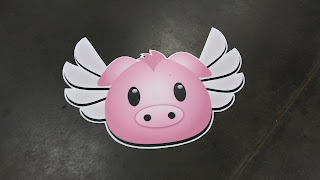 I've only been to Cincinnati once.

Back in 2017, my wife ran the Flying Pig half marathon in Cincy, and we made a nice little family trip up for the weekend.

Today, pigs flew once again, as the Cincinnati Bearcats became the first Group of Five team to make the College Football Playoff.

Yes, they're already betrothed to the Big 12. And it took every single star aligning - including losses from all the right teams and a victory over the committee's #5 Notre Dame - for them to make their way in. But they're in. They're in for every Boise State, every TCU, every Utah, every UCF whose undefeated efforts were deemed not enough by the Powers That Be to this point.

As a USF alumnus, Cincinnati has been a conference foe for longer than I've been a Bull, through the Metro, Conference USA, the Big East and the American. Under most circumstances, I'd consider them a rival. But this comeup is bigger than any individual rivalry. It's the shattering of the glass ceiling that has prevented any team from outside college football's college structure from so much as sniffing a championship.

It's entirely possible that Cincinnati gets the brakes beat off them by Bama in the semifinal. They wouldn't be the first - each year of the playoff has featured at least one semifinal blowout so far. Some would undoubtedly use it as evidence that Cincy didn't belong, but the fact is, they earned their way in and now have a chance at the unthinkable. This year's playoff field is notable in that beyond Bama, no other participant has won a championship in the 21st century. So while I'm excited to see Michigan and Georgia in the mix as well, I'm rooting for Cincinnati. Because in a phrase I haven't uttered a ton since the days of the Big East, we all we got.