For All the Mayo 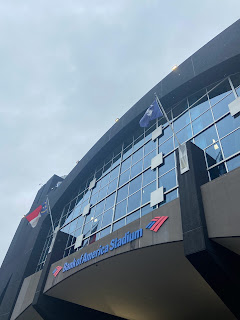 On a gray, foggy, intermittently rainy day in Charlotte, I reunited with live football.

I was at the same bowl - then the Belk Bowl - in late 2019. Then 2020 was, of course, 2020, and despite a few games of interest nearby this past season, I kept my distance. But that streak broke today a short drive down I-85. While I had always intended to attend, I waited until the last minute to buy my ticket. Having planned on going to the Military Bowl parade while in Maryland earlier in the week, I had already been affected by one bowl cancellation, and hoped that the game in Charlotte wouldn't meet a similar fate.

The Duke's Mayo Bowl pitted North Carolina against South Carolina, at the crossroads of the Carolinas, and the bowl couldn't have asked for a better comeback after the 2020 season. With Columbia and Chapel Hill within easy driving distance - to say nothing of the untold thousands of Gamecocks and Tar Heels living in the Charlotte Metro already - the game was well attended and lively. The bowl's social media presence and the promise of a mayo bath (and a donation to charity) for the winning coach, added intrigue for the home viewers, even the irritable bowl syndrome folks who think there are too many meaningless bowls.

I saw the Mighty Sound of the Southeast most recently at the 2018 Belk Bowl; I haven't seen the Marching Tar Heels live since 2007 when USF played in Chapel Hill, though I've seen their pep bands plenty here in Greensboro. I was seated in the upper deck, TV side, on about the side 1 40 yard line, meaning South Carolina has about a 20 yard advantage on my ears, but even without that, it was clear they had superior sonic output. I also happened to be on the South Carolina side, so I only got UNC's band from the backfield.

While the well attended game was undoubtedly good for the bowl's coffers, it made it a bit tougher to navigate as a band fan. My experience with both bands was from my cheap seat perch, while in year's past I've been able to move down closer to both bands. Still, it was great to be out there live once more. For more, check out #bowlbands on Instagram and Twitter. Here's to 2022!