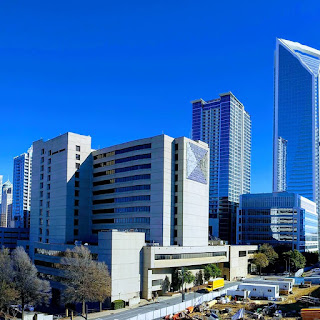 This season gets underway with College GameDay from the MEAC/SWAC Challenge in Atlanta. The annual early season tilt matches the nation's two Division I conferences composed entirely of HBCUs. After being a mainstay on the Sunday of Week 1, the game this year finds its home on the Week 0 slate, kicking off the college football season as a de facto - albeit ESPNized - HBCU classic

Over the years, the Challenge has called a few different locations home, but since 2018, it has been located in Atlanta at Center Parc Stadium - the current home of Georgia State football and previously known as both Centennial Olympic Stadium and Turner Field. Atlanta. Atlanta is a logical home for the event - as one of the signs today stated, ATL is the "HBCU Capital of the World." It's home to the venerable AUC, former home of Freaknik, and hosts the Celebration Bowl and the Honda Battle of the Bands. It's also a college football hotbed, the de facto capital of the SEC - and as such a major player in the sport - and is home to the College Football Hall of Fame. This particular major event in Atlanta makes sense, but if it ever goes on the move again, Charlotte would be a great choice.

While the game features two specific programs, it is more broadly a celebration of Black college football, and puts them on an ESPN platform that's disproportionately geared towards Power 5 program. ESPN Events is based in Charlotte, and the Queen City is within reach of a critical mass of HBCUs. The SWAC faithful may point out that it sits squarely on MEAC turf, but the same could have been said for previous game sites Birmingham and Baton Rouge of the SWAC. Charlotte fancies itself the up-and-comer with regards to major events in a southern metropolitan area. ITs airport is easily accessible as a major hub. The Belk Kickoff/Duke's Mayo Classic has etched itself a spot on college football's early season neutral site slate, and Charlotte hosts the ACC football championship game. Charlotte was also the longtime host of the CIAA basketball tournament, also a premier HBCU culture event.

The latter presents an interesting case. Critics of Charlotte's hosting of CIAA would note that it didn't seem the city appreciated the millions of dollars of economic impact the tournament brought to the city. Charlotte let the tournament escape to Baltimore after 15 years; Charlotte also lost the Queen City Battle of the Bands to Houston in an event now dubbed the National Battle of the Bands, an HBCU band showcase that takes place in late August. Charlotte could stand to rekindle some good will and show that they belong in the big time as an event host.

With realignment leaving the MEAC on unstable ground, there's no telling how long the Challenge will continue, but if they look to move again, the Queen City just may be the right destination.