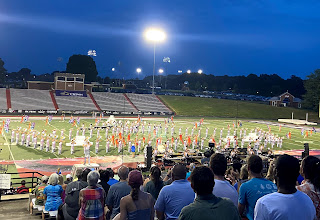 As soon as it had begun, Carolina Crown's 2021 season was over.
The DCI season this year will end as they typically have - in Indianapolis. But in the echo of a season lost to a global pandemic, as many of us continue to find our way amid its hopeful downswing, some corps are forgoing the DCI Celebration in August to forge their own path in this unorthodox season.
Taking a page from sports leagues in the pandemic's early days, Carolina Crown's approach was a bubble - returning to the shared living arrangements at Gardner-Webb University that usually host their training camp. After keeping the corps together via Zoom and other virtual means, they moved in to spend five weeks together in preparation for CrownLIVE - the culminating event and only public performance by the corps this year.

I've only made the trip to Boiling Springs once before. In a typical year, a two and a half hour trip from home for what is ultimately one corps' performance is a tall ask when I'll likely catch a few full slates in the Carolinas and Virginia. This year, I didn't spend too much time hemming and hawing before ultimately deciding I was going for it.
Seven hundred days. That's the time, I learned Saturday night, in between Finals Night 2019 and that performance. What I did not expect, but absolutely welcomed, was that the show would be a celebration of the return quite in the manner that it was. DCI Executive Director Dan Atcheson and DCI Hall of Fame announcer Steve Rondinaro were on hand with the functional broadcast booth on the side 1 25 yard line. The show was more of, well, a show - not the 12 minute cohesive marching production drum corps fans are used to, but a production of another type, with each piece performed individually, interspersed with commentary and interviews as the corps reset. While different, this format was welcome, as the media team spoke to the challenges the past year has presented and how the corps came out on the other side.
This year's (night's?) program was Project21: In My Mind, a line borrowed from the corps song and James Taylor classic Carolina In My Mind. In addition to the eponymous piece, this year featured “Long Time Traveler” by The Wailin’ Jennys, “Seize the Day” by Peter Graham, “Gravity” by Sarah Bareilles, and “Toccata Andromeda” by Paul Halley. Without the constraints of judging or rules, the corps marched 185 performers. In addition to more bodies filling the field than ever before, they also incorporated a series of boxes that contained the names of each former marching member. Clad in uniform pants recycled from the 2019 show and an underlayer top, the performance felt like we were invited into their final runthrough - and in a way, we were.
Boiling Springs is located at the crossroads of the Carolinas - halfway between Charlotte and Greenville, SC along I-85, as the Piedmont Plateau gives rise to the foothills of the Blue Ridge Mountains. While thousands were in attendance, this live show was a treat for a crowd largely from the two states that Carolina Crown carries in their name. Their season is over now; the marching members are almost assuredly back home, and as a corps that has come to recruit nationally in its 33 years on the field, some certainly had quite the trek. But with memories of a one-night season unlike any other, they will undoubtedly return to Carolina in their minds.
at 5:36 PM