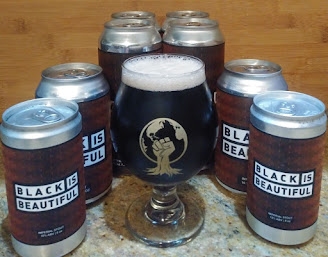 I've stuck pretty close to home since mid-March when coronavirus changed so much here in the US. It was a quest for beer that got me out.
To be fair, it was more than beer. Black Is Beautiful is a nationwide collaboration spearheaded by Weathered Souls, a Black-owned brewery in San Antonio, TX. On the heels of the murder of George Floyd and the subsequent uprisings, Weathered Souls started a collaboration and a conversation, with beer as the vehicle. The collaboration was Black is Beautiful, an open source beer recipe made available to any brewery or home brewer who wanted to try their hand at it. Participating breweries were asked to donate their proceeds to "local foundations that support police brutality reform and legal defenses for those who have been wronged" or  "local organizations that support equality and inclusion"  While also committing to "the long term work of equality." Breweries from all 50 states, several countries, and home brewers signed on to the project, which meant any enterprising beerhead could stake out on a mission. I was such a beerhead.
I identified five breweries within an hourish drive of me who were brewing their own takes on Black is Beautiful, and inadvertently ended up with a sixth before I was done. While none of the eight breweries here in Greensboro participated, there were a few options in the Triad and just beyond.
My first trip was out to Wise Man, who did a version with chocolate and raspberries. Next released was across state lines - my first such trip since before March - to Ballad Brewing up in Danville. As far as I can tell, they went with the base recipe, but did a great job with it.
The other four came in the same weekend, as July gave way to August. I headed out on Friday to Kernersville Brewing, where they had their version on draft, and came home with a crowler. A trip down to Ikea in Charlotte also led to a stop by NoDa (and Divine Barrel, but they were unexpectedly closed) - while I wasn't heading down to all of Charlotte's myriad options, those in north Charlotte were accessible enough. NoDa altered the normal stout recipe into a dark pilsner. Sunday was for points east; Forgotten Road Ales in Graham, and Durty Bull in Durham. Forgotten Road offered the most options: A mixed four pack with their base recipe and coconut, chocolate hazelnut, and cinnamon vanilla varieties, while Durty Bull partnered with fellow Durhamites Jeddah's Tea for a chai version.
And while that ended my personal quest, I saved some for trade - both with a specific friend and potentially for future use - and I might mess around and do a vertical of what I've got at some point. And while I appreciate the project as a beer fan, I'm hoping it did what is set out to: Start the conversation.
at 2:03 AM

Furniture is a big deal in the design industry. A well-executed concept can result in a timeless piece of furniture that never goes out of style. Furniture builds up over time - the more the furniture recorder traces of the owner's whereabouts and lifestyle, the more it will increase its value for the owner.
we arkah committed to design your dream furnitures with most modern and stylish look. we are just a click away!
for more info visit : https://www.arkahexports.com