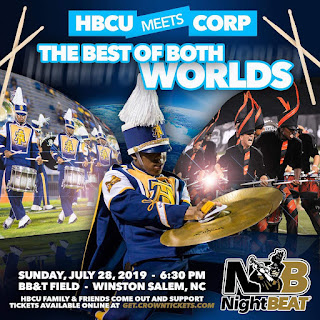 If you've been to NightBEAT since it made the move to Winston Salem, you may have noticed a group in the stands or in the lots, usually clad in gold, taking in the show.

They were the Blue and Gold Marching Machine of North Carolina A&T State University, and this year, they'll be part of the show.

A&T sits across the Triad from the show's home at Wake Forest, and boasts the largest, most prominent marching band in the area. They'll be teaming up with the team from Carolina Crown who puts on the event to add value for all attendees, and the Aggies are sure to win some new fans from the drum corps-centric crowd.

Many will note the seeming incongruence of an HBCU band at a DCI show. Frankly, that's the beauty of it. Fans of any facet of the marching arts should be able to enjoy the entertainment that features A&T, 11 World Class corps, and SoundSport program Thunder of Roanoke. And pump the brakes if you're thinking the Aggies are a fish out of water. While unmistakably and undeniably an HBCU band, the Blue and Gold Marching Machine has shown that when they incorporate corps style elements, they're damn good at that too. There's no telling if the Aggies will give you what they do best, or switch their swag up for a feature to show that they can get down whichever way they please.
at 1:51 AM

Email ThisBlogThis!Share to TwitterShare to FacebookShare to Pinterest
Labels: DCI, HBCU, NC A and T Aggies