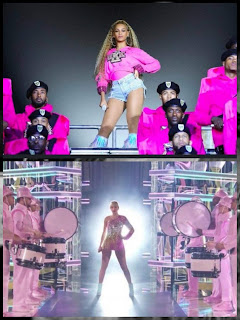 Taylor Swift is an inspiration.

I've been without a charger for my laptop since leaving it in Columbus in later January. I hadn't yet replaced it, and pieced together my non-work computer time with my phone and occasional library trips. I had made the loose commitment to go by the Apple store for a new charger "some time in the next week."

After seeing Taylor Swift's Billboard Music Awards performance and the dragging that ensued, I made time to get it today.

I've got to tell you this story before I tell you the main one: Of late, I catch most zeitgeists late. Blame the kids, blame the schedule, blame the priorities, but if it's hot and you're talking about it, I probably haven't seen it yet. But like getting a charger to write this here, I made time for Beyonce's Homecoming. I'm not Hive, but her steadfast commitment to the HBCU band vibe made it must-watch TV for me. Indeed, I started watching the day it dropped, and finished over the weekend. It was for that reason I had full context when Taylor bust on the scene.

There's no two ways about it: Taylor's performance was reminiscent - nay, derivative - of Beyonce's. Her intro, from the whistle blasts, drumline, and opening pose to the use of pink (a muted baby pink to Beyonce's Bret Hart hot pink), anyone who had seen Homecoming not two weeks prior would have made the same inference. Some speculated that was the point - after all, Taylor's performance has been the talk of the day in a way it may not otherwise have been - but the reviews have been less than kind. She's been dragged all up and down social media, with folks referencing her unseasoned, Great Value brand of Coachella, or as it trended on Twitter, Mayochella. True enough, Beyonce's not the first artist to incorporate a marching band, but when it's done so high profile and so recently, it's hard not to notice. And perhaps most egregious of the rip was the undercard of the drumline present at Taylor's performance: They weren't that good.

Other than the swaggerjack, there were other elements at play. First, Beyonce curated an HBCU marching band for her performance that was able to co-create the experience with her. In contrast, Taylor opted for what was functionally percussive set design - window dressing for her performance in the form of System Blue, the drums-for-hire arm of 18 time DCI World Champion Blue Devils.

Eighteen championships. I only bring their Bama-like pedigree into the discussion because it seems to defy my earlier point: They weren't that good. The lack of precision from a unit associated with a four-time Fred Sanford High Percussion award-winning corps brings to light a cultural disconnect. To observe the players in action, it was likely they were given a stage direction like "have fun!" or "get funky!" For whatever reason, the moment they got loose, all precision went out the window, a fatal flaw. Fun is not the opposite of discipline. Let's jump back to Beyonce, and in the larger vein HBCU bands. Her squad clearly had an amazing time, and performed at a high level. But to equate having fun with lack of discipline hardwires other false dichotomies that manifest as prejudice and discrimination in the marching band world.

If you accept the parsimonious narrative, System Blue wasn't just told to get funky. They were told to emulate an HBCU band. That doing such would cause them to throw their chops out the window is troubling, but unsurprising. The belief that HBCU bands are primitive is an old trope that persists despite evidence to the contrary. Corps style bands have long looked down their nose at show style bands, even as they've tried their best to bite elements since, say, late 2002 or so. But the only judge that matters is the audience, and consensus is T Swizzle got cranked on.
at 12:37 AM