Virginia Should Not Call In Vain 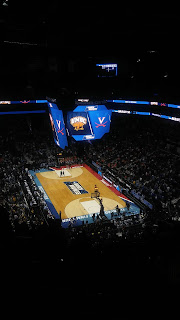 I don't know what Ryan Odom's vice of choice is, but I hope Tony Bennett bought him an extra large.

The Virginia Cavaliers men's basketball team entered the sports pantheon as the 2019 national champions. It was 388 days prior they made a different kind of history: Being the first 1 seed to fall to a 16 seed in the first round of the NCAA tournament. It's no stretch so say the two are related.

Bennett and his team spent the entire season fielding questions about the UMBC loss. The four letters rang out as chants in rival arenas. And though UVA ultimately won the title. event trailing in the first round against Gardner-Webb elicited a touch of fear in the Wahoo faithful.

A redemption story needs something from which to redeem, and last year's loss provided that spark. Few doubted Bennett's coaching acumen, but the fact that he had yet to make a Final Four was a glaring omission on his resume. After the loss, there were louder-than-whispers that for all of his talent, he was prone to underachieving. It's well documented that Tony Bennett is a Rocky fan, and it wouldn't suprise me if he saw shades of the pugilist's path in his own squad.

Some may think I'm hitching UMBC to UVA's coattails. Quite the opposite - I'm simply taking credit for the assist. When the inevitable 30 for 30 or documentary comes out, just be sure it starts on March 16, 2018.
at 6:06 PM