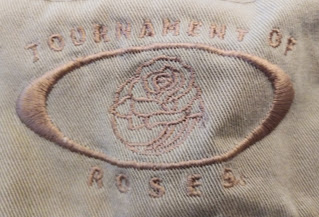 A khaki, canvas bucket hat. It's too small, if I'm honest with myself, especially if I'm in need of a haircut. But every now any again, it comes out. It's one of the few physical keepsakes I have, along with a couple of lapel pins and a watch that stopped keeping time long ago.

Twenty years ago, I marched in the Rose Parade, a senior drummer in my high school marching band. It was the third of five trips the Alexis I. duPont High School Tiger Marching Band made, meaning if you were a four year member of the band from anywhere between 1990  and 2008, you probably made the trip to Pasadena. Along with the tradition of excellence, it's probably one of the things that binds generations of Tiger Band members. Even 20 and 15 years later, my brother and I - he marched in the 2004 parade - still connect over it. And along with the Rose Parade's own tradition, it's the reason I hold it - and by extension the Rose Bowl - at a reverence often reserved for Big Ten or Pac 12 fans.

The 2019 Rose Bowl will return to its traditional roots, pitting the champions of those two conferences against one another. In doing so, Ohio State will make the first trip to the bowl since 2010 (and the first and only with Urban Meyer as head coach), while Washington will return for the first time since 2001. While both schools started (and one ended) the season with their sights aimed higher, it's hard to consider the Granddaddy of 'em All a consolation prize.

Both the Alabama State Mighty Marching Hornets and FAMU Marching 100, adding a pair of HBCUs and another Sudler Trophy winner (FAMU being both) to the parade. In conjunction with American Honda's 60th anniversary, they have put together a 60 member drumline featuring drummers from HBCUs. This is notable because Honda is the title sponsor for both the Rose Parade and, of course, the eponymous Honda Battle of the Bands. The Honda won't take place in 2019 with the Super Bowl taking place in Atlanta, so I appreciate that Honda still kept HBCU bands at the forefront.

Ohio State's band is wrapping up quite the auspicious season. Their own merit got them to the Macy's Thanksgiving Day Parade, while their football team's performance got them to the Rose Bowl, putting them in two of the nation's highest profile parades within about five weeks of each other.

Finally, the two Sudler Trophy winners - Ohio State and FAMU - both hit a milestone this season that we'll get to see multiplied in this year's Rose Parade. Both bands welcomed their first Black woman to the drum major ranks: Ohio State's Morgan Davis, and FAMU's Cori Bostic. Bostic is the first woman to hold the role within the Marching 100, while Davis is TBDBITL's fourth woman in the post.