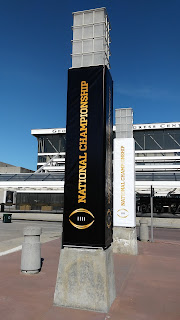 The College Football Playoff has gotten it right.

Not necessarily the selection, or the number of teams in the playoff, but in allowing the Sugar and Rose Bowls to wag to dog and camp on New Year's Day, the Playoff did the next best thing with the semifinals in years that they aren't hosted by those two bowls:

They made Saturday great again.

There were missteps along the way. New Year's Eve games that took place on a Thursday when many had to work. Saturday fell into their lap in 2016, but the committee was wise to keep the day traditionally reserved for college football holy. Sure it makes for a slight hiccup in the steady crescendo that bowl season becomes with New Year's Day games, and it leads to a lax interpretation of New Year's Six, but a Saturday full of football - the last we'll have until next season begins - that culminates in two games with national title implications sure does feel good.
at 12:25 AM