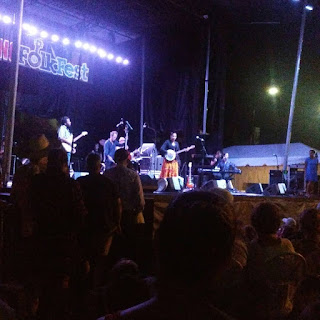 I decided a few year ago I'm opening the playbook on High Notes beyond just the week's marching band action.

The NC Folk Festival was headlined and curated by Rhiannon Giddens, a Greensboro native MacArthur "Genius" fellow, and talented folk, bluegrass, and old-time musician. I've had the pleasure to see her perform numerous times over the past few years, and caught her twice during the folk festival. Should you see her on a bill near you, I urge you to seize the opportunity.

That said, a quick on-brand note as it relates to the folk festival: Just as I've opened the playbook for High Notes, so too has the folk festival in the past, describing folk as music with authentic national/ethnic roots and casting its net such that Grandmaster Flash headlined the national festival a few years ago. To that end, I'll note that as the American college marching band in general, and the HBCU marching band specifically, is a uniquely American institution, there's no reason we shouldn't see Greensboro's own Blue and Gold Marching Machine from North Carolina A&T State University at future festivals.
at 1:58 AM