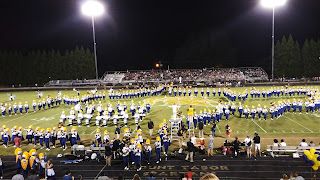 As with the Game of the Week, seeing it in person has its privileges. This week's High Notes goes to the Pride of West Virginia.

I actually caught the Pride about 30 minutes to my west, at Mount Tabor High School in Winston-Salem. Mount Tabor's principal is a West Virginia alumnus (and an unconfirmed overhearing in the stands led me to believe they couldn't get enough hotel rooms down in Charlotte the night before the Belk Kickoff Classic) and WVU performed at halftime of their game, bringing me to my first high school football game in a decade. WVU performed from their spy show, as well as some of their spirit mainstays, including Country Roads. This wasn't my first time seeing them - I caught them on their home turf (a USF victory, I'm obligated to point out) back in 2006. Once again, they did not disappoint.

And in true old band nerd fashion, I left after halftime.
at 12:47 AM