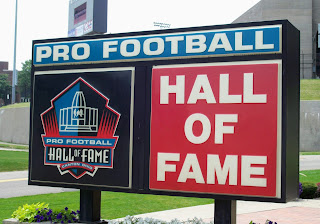 There's no love lost between me and Terrell Owens. As you know, I'm an Eagles fan, so as you can imagine, my mood on him soured rapidly circa 2005, given his controversy with my own team, and the gall to go to a hated rival. Still, with the soothing salves of time and a Lombardi Trophy, I don't hold much of a grudge, and even when he was persona non grata, I could never deny his talent.

TO was selected to enter the Pro Football Hall of Fame with the class of 2018. It's an honor that frankly, I believe is overdue. He agrees. But as he did in his playing days, Owens is doing it his way: He has chosen to boycott the enshrinement festivities in Canton, opting instead to celebrate at his alma mater, the University of Tennessee at Chattanooga. In turn, the Hall's ceremony will not individually honor Owens, though he will still be enshrined.

For his decision to skip the ceremony, TO cites players - "past, present and the future" - whose skills should have made them first ballot selections but whose dreams were deferred. This applies to any number of players, of course, but I can't help noticing Owens himself fits the description.

I'm not knocking TO's decision to boycott NFL activities - indeed, I've been known to do the same myself. I actually like how he's planning to incorporate his alma mater, an otherwise unheralded FCS program that gave the now-Hall of Famer a shot. But amid his protest, there's one other factor to consider, that if it wasn't part of the decision making, may at least be a welcome side effect.

One of Owens' classmates is Brian Dawkins, arguably the most beloved former Eagle of the modern era. Eagles fans will travel to Canton by the thousands, and it's not unreasonable to believe the reception for TO's enshrinement may fall short of unconditional positive regard. While it would take quite a set of unsavory folks to boo a guy during his Hall of Fame induction, Philly fans would be just those people, if for no other reason than to keep up the brand. And even if there's love in those boos, it's not something you should have to endure during what should be the pinnacle of your legacy. TO saves himself from that potential by celebrating his favorite thing - himself - in a place where everyone's there to do the same.
at 1:36 AM