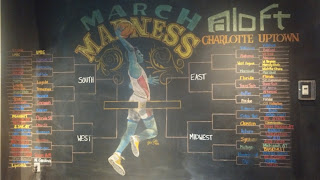 As the 2018 iteration of One Shining Moment approaches - one that will certainly feature UMBC - I look to a few possible outcomes of the first round's historic upset.

First, personally: I've always rocked UMBC gear regularly, though I'd be lying if I didn't acknowledge I might do it a little more now. And people know what the hell it is.

In addition to the One Shining Moment feature, I hadn't considered until Brandon Horvath mentioned it in a quote in an ESPN article: The team is almost certainly going to be up for an ESPY this summer.

While this won't be a one-year proposition, a bit more success - and I'll note, coach Ryan Odom has already agreed in principle to a contract extension - could lead to a shift the next time realignment rolls around.

As a USF alumnus, I know a thing or two about conference realignment. UMBC has been a member of America East for the past decade and a half. In general I have few complaints about our conference membership, save for one big one: being a geographic outlier. UMBC's closest conference foe lies two states and 250 miles away, despite the contiguous state cluster of all other member institutions. UMBC is the second newest member, and in its most recent expansion - then Division II UMass Lowell - there seemed no speedy interest in bridging that gap. Might hardwood success make us an attractive target for another league?

It's tough to say. After all, being competitive is all but an after thought when it comes to television markets when realignment is concerned. There are a handful of conferences that are geographically and competitively reasonable:

-The Colonial Athletic Association. It's a perceived step up, perhaps the class of the one-bid leagues. From a media standpoint, it's a tough sell with conference member Towson just a few exits around the Beltway. From a personal standpoint, Elon's right down the road from me.
-The Metro Atlantic Athletic Association. We'd still be geographically disconnected from the rest of the MAAC, though the trip to the closest opponent cuts nearly in half from the America East. We'd be the only public school, but reunite with old NEC conference foes Quinnipiac and Monmouth
-The Big South. We fit the Mason-Dixon Line definition, at least, and we've been members before. Selfishly for me, member High Point is a short drive away, with several others a reasonable distance.

No one knows what the future holds, but here's hoping it's bright for the Dawgs.
at 1:53 AM