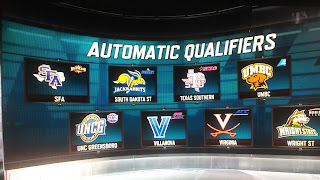 My #bracketbands stance has long been that March Madness begins with the conference tournaments, but all of us - especially those of us in one bid leagues - yearn for the Big Dance.

The fun began a week ago, as UNCG punched its ticket to the tournament, avenging last year's conference championship game loss to East Tennessee State to become the SoCon champions. The better part of the next week was hope and holding pattern as we waited to see where the Spartans, who hadn't seen the tournament since 2001, would be headed. Luckily, I had something to occupy my time.

The next night, I tuned in live from the brand new UMBC Event Center to see the Retrievers take on Hartford for a berth in the America East title game. The Dawgs won themselves a trip to Vermont to take on the #1 seed - and perennially problematic for the good guys - Catamounts this past Saturday. Saturday was admittedly a bit of a bonus for me - I was not without hope, but history hadn't been kind to the Retrievers at UVM. The game was competitive throughout, and I had reason to believe victory was within grasp. And then:

I had about 28 hours to wait until the selection show. I took an educated guess that UNCG wouldn't end up in Charlotte, but UMBC very well could. Sure enough, they called our name - the 16 matched up against overall #1 Virginia. Historically, the odds are impossible, but I'll take it. Moreover, I'll take it in live on Friday night.

*                    *                    *
I can't ignore my other alma mater, though I won't know their fate for another hour. USF took the best-available slot in the American Athletic Conference women's basketball tournament - you only play for second place when you share a conference with UConn, and is headed to the dance as well. ESPN's bracketology currently has the Bulls as a 5 seed, coming to Raleigh in NC State's pod (which'll make for a packed weekend), though a 4 seed isn't out of reach.