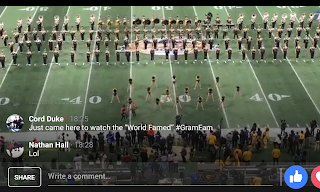 The Worldwide Leader's broadcast of the Celebration Bowl's halftime and 5th quarter was genius, evil, or evil genius.

It started with a social media alert - Instagram telling me The Undefeated has started a live video. I was already watching the Celebration Bowl, so it wasn't too hard for me to immediately put two and two together: Halftime on deck! Indeed, The Undefeated, described as "...the premier platform for exploring the intersections of race, sports and culture," was going to bring us what the ABC broadcast wouldn't: Halftime of the HBCU national championship, broadcast as the good Lord intended. Kind of.

Make no mistake: I'm well aware that The Undefeated is a product of ESPN. Any praise or criticism I levee within is the same of ESPN itself. So let me begin with the praise. I'm pleased that ESPN found a way to bring us halftime - and later, the 5th quarter - that the audience gathered around for HBCU football's top prize no doubt expected. That we'd get to see it wasn't a given - after all, they had let us down before, and we had to seek other means. I was happy to get to see the bands be the focus, and on an official ESPN platform, no less.

That's about where the dap stops.

I can't lie - I was excited to find The Undefeated broadcasting halftime via Facebook, Instagram, and Twitter. But I can also acknowledge there was no figurative or literal cost to ESPN to do so. The halftime broadcast was the high angle look we've often gotten when we do get to see bands, often during the Rose Bowl or National Championship. The 5th quarter was a handheld phone pointing at one band, then the other. As an outfit with as much broadcasting capability as anyone, we got a camera phone with no tripod. They would have been best served to let the folks at Eight to Five or Marching Sport take the reins (and if you doubt me, far better coverage can be found at Marching Sport's YouTube page). All the while, the television broadcast still cut back to the studio to sell ads and continue to promote the rest of Capital One Chick Fil-A Bowl Week Presented By Northwestern Mutual. They may even have flouted some of the broadcast/copyright laws that are often the hollow reason for not showing the bands. We as bandheads were served scraps, but because we've often gotten nothing or some hero's cell phone video in similar fashion to The Undefeated's broadcast, we ate it up.