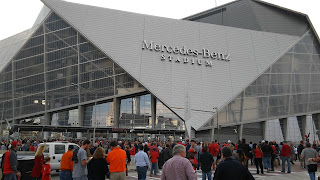 The greatest trick the College Football Playoff ever pulled was forcing me to cape for C.Florida.

Two weeks ago in Atlanta, North Carolina A&T capped off a perfect season with a Celebration Bowl victory over Grambling. With the win, A&T earned the right to be called a champion.

When UCF tries to complete their perfect season on New Year's Day in the same venue, they'll have no such opportunity.

The Knights have already grabbed their brass ring, a consolation prize at best: The New Year's Six berth that comes with being the highest ranked Group of Five champion, and a shot at SEC runner up Auburn. Some would argue it's a no-win game for Auburn, but I find it similarly fruitless for UCF: Lose, and they were supposed to; win, and meet excuses about how an unmotivated Auburn didn't want to be there.

But what the Knights don't have is a shot at a championship. No Group of Five team does - at least not as a single year accomplishment. Houston came closest, chasing a bowl victory over FSU with an early season win over Oklahoma. But even an undefeated 2016 campaign by the Cougars would likely have served only to put them in the conversation, not the playoff itself. That slim chance was only a function of getting Oklahoma on the schedule, the likes of which is increasingly rare for high caliber Group of Five programs. It's not just a glass ceiling - it's bulletproof.

Three years ago, the MEAC and SWAC decided that instead of an autobid to the FCS playoffs, their champions would meet in December to crown the HBCU national champion. The SWAC ended its relationship with the playoff in the '90s in favor of a conference championship game, and the MEAC now sends its champion to Atlanta, though highly ranked runners up are still eligible for an at-large bid. Seasons that would have once ended in an early round playoff exit now had the opportunity for glory in a championship of meaning.

The system we currently have still keeps this opportunity from Group of Five schools. The common refrains are that "they ain't played nobody!" and "there's no way they're going undefeated with [insert Power Five team]'s schedule!" - qualifiers that create an unbalanced narrative. After all, if you're going to mythically burden them with the schedule, you must also arm them with the resources these programs wield. For my money, I'm taking UCF with Auburn's budget over the opposite.

The fear of letting a deserving UCF - and to be clear, the language of the College Football Playoff is "best," not "most deserving" - is that it would result in a blowout of an overmatched team. Nothing prevents that from happening with the current setup - Just ask Ohio State, Michigan State, or FSU.
at 5:34 PM