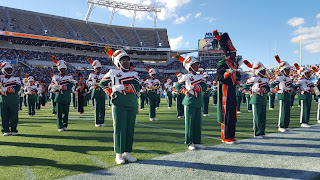 FAMU's Marching 100 unveiled new uniforms this past weekend at the Florida Classic, to mixed reviews from HBCU bandheads. The new uniforms were a gift in action from FAMU and Marching 100 alumni Bernard and Shirley Kinsey. Stylistically, they're not a drastic departure from the previous look, and in general I'd say they're not better or worse, just different. They trade a base orange for a base green, but with neither holding the "dark" vs. "light" designation in their color scheme, that switch isn't exactly whiplash. Some have noted that the look is a little more corps style than show style, and I can certainly see where folks are coming from with that.

The front of the uniform incorporates a stylized F in the piping and striping, a technique manufacturer Fruhauf Uniforms has used before, including incorporating the pickaxe into Charlotte's band uniforms. The new uniforms lack spats, but so did the old ones. A small detail is some Rattler scaling on the sleeve, and gone are the capes that the old look used. Their covers add a plume, but seem mostly unchanged. 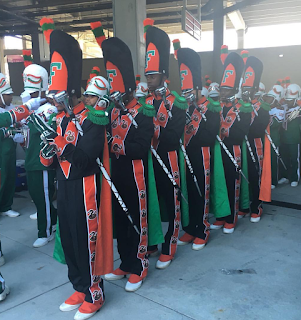 But perhaps the most notable change was the new drum major uniforms. While there's no word if this is their only look - past drum majors have had orange, green, and white options - the debut had the drum majors in black uniforms.

In sports, black for black's sake - incorporating black where it's not otherwise a school or team color - is typically used to make a team look faster, stronger, or tougher. Interestingly enough, the black with orange and green accents is reminiscent of the uniforms that Miami debuted during the Virginia Tech game this year. But black often has a different purpose in the marching world. Black is used, in set pieces and uniforms, to obscure, de-emphasize or draw attention away from. Speaking in gross generalities, traditional and show style bands tend towards drum major uniforms in white or school colors, the brightness underscoring their role as showmen, while corps style drum majors tend towards black uniforms, their role being less to be on display and more to serve as a metronome. Given that dynamic, FAMU has to have tended towards black uniforms either for the the sports justification, or to emphasize the black in Historically Black College/University.

Black for FAMU presents an additional issue, however: The Rattlers derive their colors from Florida citrus and agriculture. To introduce black into the palette is functionally adding rot to the scheme. It's the same reason I don't love BFBS for the University of North Carolina-Chapel Hill, adding a storm cloud to their Carolina blue skies.
at 5:37 PM