Raise High the Black and Gold. 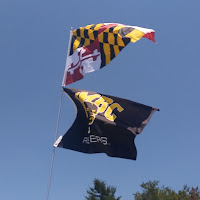 The College World Series gets underway today. Two weeks ago, I made a stop (and subsequently, an exit) on the Road to Omaha.

I headed a half hour to my west with my kids to see UMBC take on Maryland-College Park in the loser's bracket of the Winston-Salem regional. While I was gung-ho about catching both UMBC games, I allowed reason to get the better of me and didn't hightail it out there after work on Friday evening, knowing they were guaranteed a Saturday game.

While my wife didn't travel, I took both of the little double-legacies to cheer on the Retrievers at Wake Forest. We opted for the Bojangles tailgate as a way both to get something to eat before the game, and to pop up the flags. A fellow UMBC fan suggested I might confuse folks flying a Maryland flag and a UMBC flag; I reminded him that the flagship does not own the state flag. I also chatted with a College Park fan in the lot, and surprised myself with how much I was able to offer about the team's current events, despite not following regularly. 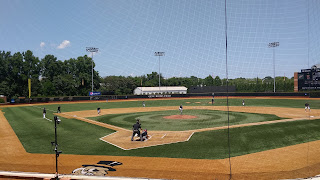 In the shade behind home plate that housed nearly all of the spectators on that hot early June day in the south, I watched the good guys get mollywhopped and end their season to the tune of 16-2. It wasn't anything I didn't expect, and it was great to see the ovation the team got as they left the field. Too bad I couldn't get anyone to join me in singing the alma mater.
at 1:53 PM