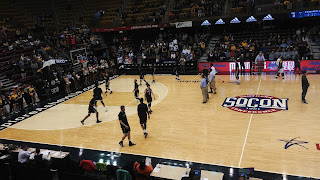 The Madness has begun.

Some use March Madness as shorthand for the NCAA Tournament, but it's already upon us. From teams jockeying for position at the end of the regular season, to conference tournaments where nearly every team in America still has a shot to play their way in to the Big Dance, college hoops hits its fever pitch well before brackets are ever out.

By the time March hits, I'm well into a binge of my own. As I note just about every year, as much as I love college basketball, it doesn't get the lion's share of my attention until after college football wraps up. At that point, it's on: My audio focus turns to college basketball podcasts, I start stalking conference standings, and I try to catch up on the storylines I've missed on the likes of ESPN and CBS Sports.

When I first tuned back in, one of the big stories was whether or not the RPI would continue to play a role in selection and seeding of the brackets. Long considered an imperfect system, most pundits will first look to metrics like those of Ken Pomeroy and Jeff Sagarin, but RPI is still the gold standard when the selection committee steps into the room. Still, it seems there's a light at the end of the tunnel, and some of the advanced stats will find their way into the process in the future.

As storylines progressed, I was surprised this week to hear so much focus on smaller conference tournaments and whether regular season champions losing in the conference tourney doesn't allow them to put their best foot forward. As an alumnus of one one-bid league and an employee in another, while I can empathize with the clubhouse leaders who ultimately lose their chance to dance to a bad night in a conference tournament, I can't for a second ignore the excitement that comes with the possibility of playing one's way in. For every dejected and displaced Monmouth, there's an elated Iona - team, band, spirit groups, and fan base - whose team earned the shiningest of moments they're likely to see.

Put another way, as Jon Rothstein often reminds us: This is March.
at 10:17 PM