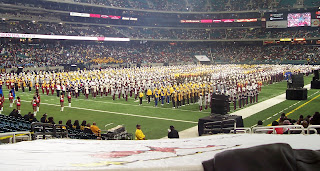 It's been a huge two month stretch for the Georgia Dome in its final season. Through December 2016 and January 2017, the Atlanta Falcons' home has hosted or will host the SEC Championship, the Celebration Bowl, the College Football Playoff semifinal in the Chick Fil-A Peach Bowl, an NFC Championship that sent the home team to the Super Bowl, and the Honda Battle of the Bands.

When Mercedes Benz Stadium opens later this year, its stretch a year from now will be similarly impressive. While it remains to be seen if the Falcons will bring any NFL postseason games to the Stankonia Dome, the SEC Championship Celebration Bowl, and Peach Bowl will all return; the Honda Battle of the Bands can be assumed, hopefully, and they'll add to the schedule the College Football Playoff National Championship.
at 7:09 PM