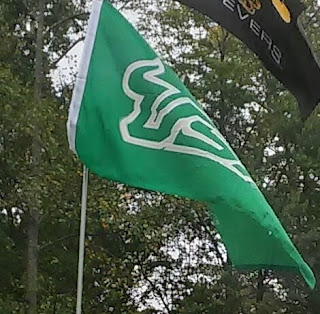 USF football's 20th season was one for the ages. After notching an 11-2 season and a Birmingham Bowl win over an SEC team, the Bulls end the season ranked for the first time in program history: 19 in both the AP and Coaches polls. Notable to many Bulls fans, USF sits just above in-state Miami and longtime conferencemate Louisville. It cements the legacy of the Willie Taggart era and gives hope for the impending Charlie Strong era. While star running back Marlon Mack has announced for the NFL draft, the cupboard is far from bare for Strong; among those returning is quarterback Quinton Flowers, the CFPA Performer of the Year.

From a ranking standpoint, I remain peeved that the College Football Playoff committee does not rerank at the end of the season, their most important job having been accomplished on the field by the Clemson Tigers. In the committee's final rankings, USF was left off in favor of a Navy team who would lose twice more since the early December ranking.

The future is bright for the Bulls, who are looking to capitalize on this year's successes. CBS Sports ranks USF at 10 in its way-too-early top 25, and uses the H word (Heisman) in conjunction with Flowers. USF's schedule should prove favorable for results - the only Power 5 program, an Illinois team that finished 2016 3-9, is coming to Tampa, as are conference foes Temple, Houston, Tulsa, and Cincinnati. It may also prove a hindrance as the Bulls seek the heights: The non-conference slate that also features UMass, Stony Brook, and San Jose State, none of whom had a winning record in 2016. We'll also miss Navy, the American West's champion, so even if USF should go undefeated (a "problem" I'd welcome, to be clear) we would likely lack the national respect. Nonetheless, I'm proud of this year's Bulls and optimistic for the season to come.
at 10:55 AM