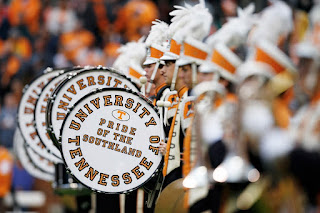 I questioned not long ago which of the regional/specialty/conference TV networks would be the first to incorporate regular marching content. The more I read about the development of Project X--er, the SEC Network, the more I think it's abundantly clear that they'll hop on this and run with it. -"Oh. Of Course.", June 2012

This isn't about "I told you so," but rather excitement that my prediction came to fruition.

This past Thursday night, while watching the stateside opener of major college football, host of [Memphis] Tigers Tonight and Twitter friend John brought to my attention that the WatchESPN feed had a separate SEC Network+ feed for Tennessee's Pride of the Southland (and visiting Appalachian State's Marching Mountaineers) halftime show. After a bit of research, I learned that it is now standard operating procedure for SEC Network games to have a separate SEC Network+ (online only) broadcast of halftime, available via WatchESPN. There didn't seem to be much fanfare; the first "announcement" I came across was via lsufootball.net on Twitter. Still, scanning the SEC Network TV schedule for any Saturday will show, unmistakeably, the halftime show as separate programming about an hour into each game.

This isn't ESPN's first venture in showing halftime, but it's the most significant. Last summer, ESPN began televising halftime of MEAC games in ESPN3, but those were few and far between. They've shown bowl game halftimes in varying amounts,but those games are special by design. This current move means three halftime shows each Saturday, the regularity of such we be never seen in the ESPN era. While this is great in a vacuum, it may very well multiply in college football's arms race. Consider that the Big Ten Network is a rival on multiple fronts: the conferences, the networks (ESPN and Fox) and the fact that the Big Ten, a conference that takes marching seriously and holds 10 Sudler trophies among its 14 schools, is being upstaged by another conference. It's not unreasonable to consider that they could follow suit. At the risk of quoting myself again, from June 2012's "Band from Television":

Someone's going to hop on this, and whether it's the Big Ten, SEC, Longhorn, or some other network, it wouldn't surprise me if the others follow suit to keep up with the Joneses.