No Longer Banned from Tigerland 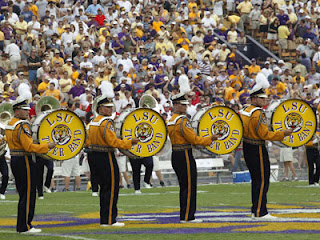 It's a little embarrassing when something lands squarely in your wheelhouse and by the time you get to cover it, the story has gone full circle. Still, all's well that ends well.

It seems LSU has a knack for peering over the edge of reason before backpedaling. It happened with the potential firing of Les Miles, and while it didn't save former band director Roy King, we're seeing it now in the marching band as well. Nearly a week ago, it was announced that LSU was no longer welcoming visiting bands to perform at halftime in Tiger Stadium. This disappointing news came as many wondered aloud if Jacksonville State's Marching Southerners would make the trip to Baton Rouge. While disappointing, the original decision was not without basis: LSU may very well have the least sideline clearance of any SEC stadium, and an additional 800 bodies on the sideline during live game action late in the second half is a risk management nightmare. Still, after considerable discussion from the band community, LSU has reversed course, instead working with risk management to devise a plan that will keep safety at the forefront while still allowing two bands to participate.

While the reversal took less than a week, it may or may not salvage Tiger Stadium's Band on the Road season, which best case scenario would feature Southern Miss, South Alabama, Jacksonville State, and Alabama. Still, LSU competes in one of the three most Sudler Trophy-rich divisions in college football, with regular visits from Alabama, Auburn, Texas A&M, and Arkansas. Even so, full band visits haven't always been the norm among divisionmates, perhaps due to the challenges that led to the temporary ban in the first place. With a new plan in place, we'll hopefully even see an increase in visitors to Death Valley.
at 9:32 AM